Rory McIlroy confident he can join elite club at Augusta

World number two Rory McIlroy speaks to the media as he aims to win the US Masters for the first time. Video: Reuters/Augusta National Inc. 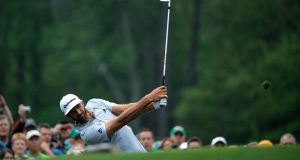 Dustin Johnson: the world number one has been in superb form in advance of the US Masters at Augusta. Photograph: Mike Segar/Reuters

Maybe; for in such an immaculate environment as Augusta National Golf Club, where there is a place for everything and everything is in its place, yesterday’s precursor to the tournament itself was a disruptive one.

The day was punctuated by weather delays, an abandoned Par 3 contest, incomplete practice rounds and a driving range where caddies seemed to have umbrellas permanently attached to their arms and their players were unsure if they were coming or going.

The good news is that the weather system – one in which the air sizzled with electric energy and threatened real menace – has passed over the region, which should clear the path for four rounds in dry conditions.

But there could yet be a sting in the tail, for the first two rounds are likely to be played in strong winds of up to 25 miles per hour, gusting at times to 35mph, which will demand both well-executed shot-making and, perhaps as importantly, mental fortitude. This is no place to lose the head.

“The wind is supposed to be up, and if that’s the case, it could take balls, swirl around the trees, come up well short or go long. If you put it in the wrong spot, you’ll end up making bogeys and doubles,” said Mickelson, with doubles or worse a cardinal sin for anyone with true title aspirations.

As such, Rory McIlroy’s frame of mind – relaxed, very comfortable in his own skin – could provide a vital 15th club in his armoury.

“I’m not sure if I’ve shielded it, or if it really has been more quiet, but I feel more relaxed going in, not as wound up. My patience could get very short the weeks before the Masters sometimes and I could say a few things I didn’t mean just because I was in a mood with the Masters coming up, [there’d be] a little bit of stress there.

“This year, I’ve been good, happy, relaxed, not stressed about it too much,” said the 27-year-old Northern Irishman, who – for a third year – enters the tournament seeking his place in history in achieving the career Grand Slam.

In fact, the two Irish players in the field – McIlroy and Shane Lowry – are relatively lightly-raced heading into this season’s first Major championship; albeit for different reasons. McIlroy because of the stress fracture to his rib which he sustained in January and led to six weeks away from competition; Lowry because he planned his playing schedule around the birth of his daughter. Now, both are here with clear objectives to make an impact.

For his part, Lowry – who had been experimenting and practising with a number of blades – has decided to put a new Odyssey Two-Ball putter into his bag for this, his third appearance in the tournament, as he seeks to work his magic on the greens.

The wind, over the first two rounds, will be an important factor although, given the perception that left-handers have a slight edge here, Jordan Spieth – 2nd-1st-2nd in his last three Masters appearances – has worked out the wind direction could assist right-handers, especially down around Amen Corner where his own title quest collapsed spectacularly a year ago.

“You know, 12 ends up a strong right-to-left wind, which is not too bad for a right-handed golfer; 11 the same, it helps me sit back personally into my swing,” said Spieth.

Dustin Johnson, who enters the fray as world number one, and as the unquestioned form player in the field having won each of his last three tournaments including two WGCs, has the length to use the Par 5s as a springboard. Yet, there is a degree of caution too. “It’s a tough golf course, everything in your bag needs to be working for you to play well around here,” said DJ.

Although Johnson would appear to be the man to beat, there is a salient statistic worth noting which shows that the last world number one to actually triumph in the Masters was Tiger Woods in 2002. So, things aren’t always as they seem.

And Spieth – adamant he has banished the demons which haunted him around Amen Corner a year ago – has identified McIlroy as the one man he will look for on the leaderboard as he goes about his own business.

“He’s a guy you know has been there and that you don’t feel like you have that Major-winning edge on . . . I don’t say ‘I’ve won the Masters and he hasn’t’, trust me he’s certainly capable of [(winning] and he’ll win at least one,” said Spieth.

Whether it is McIlroy’s time now or into the future remains to be seen, but the world number two has been focused on this tournament for a long time.

“I am hoping it’s a blessing in disguise,” said McIlroy of an injury which forced him into an unscheduled break but which also put an emphasis on him primarily working on his putting with Phil Kenyon and his chipping on his return, purely because he couldn’t initially hit irons or driver with any force for fear of a recurrence.

That increased focus on the short game could yet reap dividends in that ongoing quest for a coveted green jacket.