Johnson yet to confirm if he’ll compete at Masters 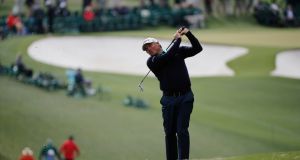 Fred Couples hits his second shot on the first fairway during the first round at Augusta National. Photograph: Mike Segar

Dustin Johnson’s prospects of competing in the US Masters received a boost as the early starters battled tough conditions.

Johnson suffered a back injury in a “serious fall” in his rented accommodation on Wednesday afternoon after the cancellation of the traditional par-three contest due to bad weather.

That put the world number one’s bid for a remarkable fourth straight victory in jeopardy, but there was encouraging news for the US Open champion on Thursday.

“We got him to the point where he got mobility,” Johnson’s trainer Joey Diovisalvi told Golf World. “He was up and moving around and definitely going in the right direction. He was very much in an under-control point going to bed last night.

“He was walking around, a lot more mobility, took a couple of practice swings slowly without a club.”

Johnson, who missed the 2012 Masters after reportedly injuring his back when lifting a jet-ski, at least had the advantage of being out late at 2.03pm local time (7.03pm Irish time).

Tournament officials said that 1.4 inches of rain had fallen on Wednesday, but without damaging the course, with a stiff breeze helping to dry it out.

The wind was making scoring difficult, however, with British Amateur champion Scott Gregory joining Brian Stuard in running up a triple-bogey seven on the first.

Gregory’s playing partner Sandy Lyle, the 1988 champion, was faring considerably better and followed pars on the first and second by chipping in for a birdie on the third.

That took the 59-year-old to just a shot off the early pace now being set by Scott Piercy, who had recovered from a bogey on the first with birdies on the second, fourth and seventh.

Scotland’s Russell Knox, England’s Andy Sullivan and Ryder Cup team-mate Thomas Pieters were also one under after birdies on the par-five second, which played as the easiest hole on the course in 2016.