Dustin Johnson: ‘It Sucks. I’m playing the best golf of my life’ 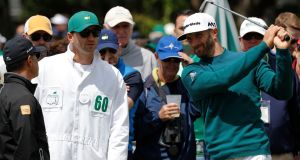 Dustin Johnson tests his swing next to his caddie Austin Johnson before pulling out of the Masters due to injury. Photograph: Reuters

World number one Dustin Johnson withdrew from the Masters just moments before he was due to start his first round at Augusta National on Thursday.

Johnson looked set to tee off shortly after 7pm Irish time despite the back injury he suffered in a “serious fall” in his rented house on Wednesday afternoon.

However, the US Open champion then left the first tee and headed into the clubhouse, leaving Bubba Watson and Jimmy Walker to tee off in the final group.

Johnson had earlier gone through a short initial warm-up on the range before receiving treatment, the 32-year-old then returning to the range and appearing more at ease as he hit shots under the watchful eye of coach Butch Harmon.

Johnson, who had won his previous three events, said: “It sucks. I want to play. I’m playing the best golf of my life and to have a freak accident happen yesterday afternoon, it sucks really bad.

“I have been worked on all morning and obviously I can take some swings, but I can’t swing full, I can’t make my normal swing and I didn’t think there was any chance I could compete.”

Johnson said that the accident happened when he was heading outside to move his car before his son Tatum got back from daycare.

“I was wearing socks and slipped and went down the three stairs,” he added. “The left side of my lower back took the brunt of it and my left elbow is bruised as well.”

World number ones at the Masters

DNS = did not start