Rory McIlroy defends round of golf with Donald Trump 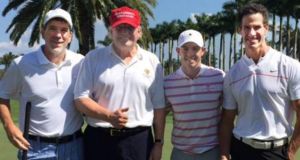 Rory McIlroy has defended his decision to play golf with United States President Donald Trump after the Northern Irishman faced criticism and abuse.

The 45th president of the United States is a keen golf fan and owns several courses around the world, and McIlroy accepted an offer to join him on the fairways at Trump International in Florida last weekend.

Trump’s comments and actions, both before and since taking office, have been rebuked by some sports people, and Martellus Bennett is among several New England Patriots players who plan to swerve their Super Bowl celebration at the White House as a result of its current incumbent’s views.

However, McIlroy has defended his actions after he claimed he was called a “fascist and a bigot” because he had accepted the invitation to join Trump.

“That wasn’t an endorsement or a political statement of any kind. it was, quite simply, a round of golf. Golf was our common ground, nothing else. I’ve travelled all over the world and have been fortunate enough to befriend people from many different countries, beliefs and cultures.

“To be called a fascist and a bigot by some people because I spent time in someone’s company is just ridiculous. I hope, to some degree, this clarifies my decision to accept the invitation that was extended to me.”

McIlory finished his post by saying he was looking forward to returning from injury in Mexico, the United States’ neighbour and the country from which Trump plans to stop illegal immigrants crossing the border into the US by building a wall.

The World Golf Championship tournament was moved away from the Trump-owned Doral course in Miami by the PGA Tour in a move which at the time angered the man who later became president.

McIlroy’s post ended: “Thanks to everyone for your continued support and I look forward to making my comeback in Mexico next week!”

In an earlier interview, McIlroy had shied away from going into his reasons for playing with Trump and instead focused on the US election.

“I really got into it once Trump ran because I knew him a little bit but at the same time I was intrigued how a successful businessman could transition into running for the highest office in the land,” the 27-year-old said.

“It is a totally different process from the UK. He obviously came at it from a completely different angle.

“I’ve said it to the man himself; on a Tuesday night at a tournament, if there was a live (political) debate, I would get room service, stick on CNN and just watch. It was pure entertainment, even if you didn’t understand politics it was this complete phenomenon.

“Something like this probably won’t happen again in our lifetime. I’m very attuned to it, I watch a lot of news. You can’t avoid it. I had no interest in politics until a couple of years ago; now I can’t seem to get away from it.

“I feel like I’ve stayed unpolitical in terms of Northern Ireland and all that goes on there but because I’m not an American I don’t feel a real part of it; I’m just interested by the phenomenon of it all. I don’t really care about the policies. The whole circus, this big show is intriguing to watch.”