Harrington and McDowell off the pace in Honda Classic 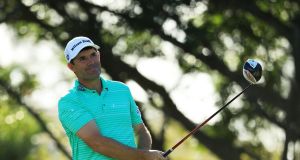 Pádraig Harrington and Graeme McDowell are both well off the pace after their opening rounds in the Honda Classic.

The pair both posted 72s on Thursday, leaving them on two over par and more than likely out of contention in Florida.

They are eight shots adrift of the clubhouse lead of American duo Cody Gribble and Wesley Bryan, who lead the way after impressive 64s. Martin Kaymer is a stroke off the lead after shooting a 65.

Séamus Power was the pick of the Irish contingent after a two-under par 68, an eagle three on the third setting him on his way. However he bogeyed the 11th to return to level par, before recovering with two birdies on his final three holes.

Harrington produced one of the performances of his career to win the tournament in 2015, after beating the USA’s Daniel Berger in a playoff.

However his chances of a repeat performance look slim after he made a very slow start at Palm Beach Gardens.

Starting on the 10th, alongside Justin Thomas and defending champion Adam Scott, Harrington opened with a bogey five. And he stalled further on the 11th, carding an ugly double-bogey to leave him with plenty of work to do from the off.

The three-time Major winner steadied the ship with a string of pars before a birdie on the ninth saw him reach the turn at two over par. However any momentum garnered from that was soon lost as he gave the shot straight back on the first – his 10th hole.

The Dubliner did threaten a back-nine revival with back-to-back birdies on the third and fourth but again failed to build any real momentum as he bogeyed the fifth before settling for a 72.

And he is joined on two over par by McDowell, who capitulated on the back nine after a promising start in Florida.

McDowell started from the first and made three straight pars before picking up a shot on the par four fourth.

That shot was given back on the sixth before another birdie on eight ensured he reached the turn under par.

And the 2010 US Open winner looked to be on a roll when he birdied the 10th – however things then unravelled fairly swiftly for the Portrush man.

A double-bogey on 11th saw him back to level par, and further bogeys on the 12th and 14th left him with an ugly-looking back nine and he signed for a 72.

McDowell and Harrington are among the later starters on Friday, teeing off at 5.45 (Irish time) from the 10th and first respectively.

Elsewhere Harrington’s playing partner Scott made a solid enough start as he looks to defend his title, the Australian shooting a 68 to sit two under par. He was one of a host of players who opened up with a 68, along with Sergio Garcia and Zach Johnson. Kaymer was one of the few big names lurking near the top of the leaderboard, finishing birdie-birdie to lie a stroke off the lead.

Meanwhile Paul Dunne will have to complete his opening round in the Joburg Open today after bad weather brought an early end to yesterday’s play. Dunne was two under par through 15 when play was curtailed – seven shots off the clubhouse lead.

1 Ireland v Scotland: Doris’ day as Caelan set for first cap
2 In mourning Kobe Bryant mourn the bad as well as the good
3 Gerry Thornley: Temple Carrig are the true schools rugby story of the season
4 Ashleigh Barty now living up to all her earlier promise
5 Six Nations: Pundits, journalists and players have their say
Real news has value SUBSCRIBE