Paul Dunne on fringes of contention in South Africa 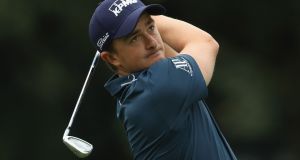 England’s Paul Waring was top of the Joburg Open leaderboard at 12 under par on Friday, but will have to complete his second round on Saturday at the rain-hampered event.

In hot pursuit is Ireland’s Paul Dunne who managed to complete his second round, firing a 68 to finish the day on six under, tied 25th.

Dunne made four birdies and just one bogey on the west course to continue his good play so far this season.

Waring still had six holes to play to finish his second round as dusk fell after a long day over the two courses, after carding 65 in his first round, which he completed earlier in the day.

He made six birdies through the first 12 holes of his blemish-free second round but faces another early start at the Royal Johannesburg and Kensington Golf Club on Saturday.

A total of 98 players had to finish their opening rounds on Friday after play was suspended due to a waterlogged course on Thursday.

More rain overnight caused further delays on Friday, meaning the start of the second round was delayed by almost four hours. Each of the 210 players in the biggest field of European Tour season had to play a round on the East and West courses at the club.

South Africa’s Darren Fichardt set the early clubhouse target after producing a second successive 66, carding an eagle, five birdies and a single bogey for an 11-under total.

Also 11 under was compatriot Dean Burmester, who was three holes from completing his second round when play was called off on Friday.