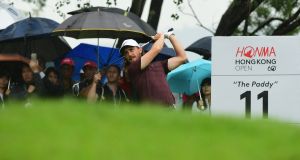 Tommy Fleetwood in action during the 2018 Hong Kong Open. The 2019 edition was postponed due to civil unrest in the city, and will be played in January 2020. Photograph: Arep Kulal/Getty

The Hong Kong Open has been announced for January.

Due to be played last month, the European Tour has postponed the tournament due to the ongoing civil unrest in the city.

It will now be played at the Hong Kong Golf Club from January 9th to 12th, though will not be sanctioned by the European Tour due to another tournament being held on the same weekend.

Keith Pelley, Chief Executive of the European Tour, said: “Due to our long-standing commitment to deliver a full field for the South African Open hosted by the City of Johannesburg, which will also be played from January 9th-12th, regretfully we are unable to sanction this edition of the Hong Kong Open.

“However, we are delighted to retain an integral role in staging one of Hong Kong’s best-loved sporting events and we very much look forward to returning next November when the 62nd Hong Kong Open will kick off our 2021 European Tour season.”