Pádraig Harrington’s Ryder Cup captaincy could be worth €2m

Biennial tournament is the lifeblood of the European Tour, providing huge revenue 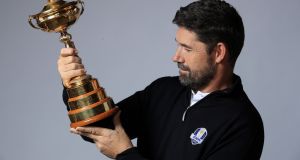 Pádraig Harrington of Ireland poses with the Ryder Cup trophy after being announced as the European Ryder Cup captain for 2020. Photo: Andrew Redington/Getty Images

As a qualified accountant, with those letters behind his name if he ever needed them, Pádraig Harrington is well aware of the importance of numbers. And of money, too. As it happens, the captaincy of Europe doesn’t bring with it any pay cheque; at least not implicitly.

But there are fringe benefits, and it is reckoned fulfilling the role of a captain could be worth up to €2million.

Word has it that Harrington doesn’t actually know what he has in the bank account, nor ever dealt with a utility bill, that it is his wife Caroline who looks after such matters so that he can focus on his golf.

Harrington’s role as captain is an unpaid one. Of course the PGA European Tour looks after any expenses required to fulfill his role up to and after the match at Whistling Straits in September 2020, but the fact of the matter is that the Dubliner – who has played in six Ryder Cups as a player and experienced the team room from a different perspective as a three-time vice-captain – has become the face of Ryder Cup Europe, something which has become a milking cash cow for the PGA European Tour.

Indeed, the money from the Ryder Cup is absolutely vital to maintaining the health of the European Tour. Without it, it would be on life support. It is the single most important contra ct for the financial welfare of golf in Europe thanks to television rights, sponsorship – with blue chip corporations like Rolex, BMW, Emirates Airlines and Aberdeen Asset Managament all on board for the match in Paris last September – along with licensed merchandise, corporate hospitality and ticket sales all adding up.

The accounts for the 2012 Ryder Cup at Gleneagles – where Paul McGinley was captain – make for some eye-brow raising reading: the PGA European Tour’s revenue in 2012 came to €260million, which brought in a pre-tax profit of €19.6million. The picture becomes clearer when you compare that with the revenue from 2011, a non-Ryder Cup year, when revenue added up to €210million and came in at a loss of €11.5million.

The difference between the two sets of figures is down to one thing: the Ryder Cup; or, rather, the hosting of it in Europe. As Nathan Homer, the European Tour’s chief commercial and marketing officer said, speaking ahead of the most recent match in Paris: “Historically the Ryder Cup has really been utterly critical for the (European) Tour. In any company, if you rely on one source of core income, that’s risky. We’ve worked hard over the past few years . . . . to diversify where our income comes from.”

Among the innovations has been the Rolex Series of events, yet, when all the chips are put on the table, it is still the Ryder Cup which is the cash cow feeding all around it.

And it is into this world that Harrington has now become the captain – and by extension – the face of Team Europe for the upcoming 20 months. Harrington has a long list of corporate partners including Wilson (his club manufacturers), Clune Construction, Dunnes Stroes, ISPS Hand, Mutual of Omaha and Orreco.

His elevation to Europe captain will like improve his corporate profile, with additional TV work (if he wants it) and other sponsorship possibilities. That his is a friendly face in the USA will also do him no harm at all. It’s an unpaid job spec, but nevertheless a potentially lucrative one.

1 ‘Your father works for my father’: Schools rugby turning toxic in the stands
2 Wexford best the weather and Kilkenny on a mad day to be hurling
3 Winning Triple Crowns: ‘Seeing Jack Kyle was a spiritual experience’
4 Few, if any, have given as much to Munster as Garrett Fitzgerald
5 On healing and wild hurling: The re-education of Diarmuid Lyng
Real news has value SUBSCRIBE

Newcastle feel the heat as Arsenal get some of their old mojo back 18:47
Clare pull well clear of Laois to keep unbeaten run intact 17:51
Offaly pick up first league win 17:44
Wexford best the weather and Kilkenny on a mad day to be hurling 17:36
Magnificent Morgan guides England to T20 series win in South Africa 17:31
Here is your handy guide to sport on television this week