Out of Bounds: EurAsia Cup is about the bigger picture 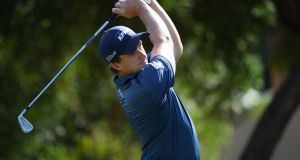 As was the case with his predecessors as captain of Europe’s Ryder Cup team, Thomas Bjorn will get a test run.

For Paul McGinley, especially, and Darren Clarke, the EurAsia Cup - a biennial match between Europe and Asia played in the January of the same year as Ryder Cups - proved informative in terms of likely partnerships, even if there were substantial changes in personnel in the time span between the matches.

For example, Clarke - in 2016 - had five players on his winning EurAsia Cup team who also featured in the losing Ryder Cup. Likewise, McGinley - in 2014 - also had five players on his drawing EurAsia Cup team who later featured on his winning Ryder Cup team: but that EurAsian clash battle-hardened the likes of Victor Dubuisson and Stephen Gallacher for the demands of team competition.

If - and hopefully he does - Dunne makes the team, it will be further evidence of his onward and upward rise in the professional game

So, it will be interesting to see who Bjorn will name in Hong Kong on Thursday as members of his 12-strong team: 10 players will be selected off the final 2017 Race to Dubai order of merit which finished on Sunday (effectively the first 10 who make themselves available for the match in Kuala Lumpur in January), with Bjorn completing the team with two wild card selections.

Don’t expect to see the names of Rory McIlroy or Justin Rose or Sergio Garcia or Henrik Stenson among the players who have made themselves available to Bjorn, which means there is every chance that Paul Dunne - who finished 16th in the final R2D standings, but was the 14th European in the final order of merit and so will benefit from others’ non-availability - will get one of the automatic places.

Those who look down on the competition as nothing other than an exhibition, or indeed a poor imitation of the Ryder Cup, should look at the bigger picture. Okay, we know it’s not the Ryder Cup. But the opportunities of playing team golf are slim and rare on tour and, just as pertinently, it is an opportunity for captains to get to know players; their personalities, how they gel with others, what they’re like in the team room etc.

If - and hopefully he does - Dunne makes the team, it will be further evidence of his onward and upward rise in the professional game. The Greystones man turns 25 this coming Sunday and his development in just two years on tour has been mightily impressive, part of a pack of twentysomethings from Europe - with Jon Rahm, Matt Fitzpatrick et al - that are capable to going step for step with their American counterparts, the Jordan Spieths and Justin Thomas’ of this world.

For Bjorn, especially with the demise of the Seve Trophy, the opportunity to get a handle on players in a team environment like the EurAsia Cup is worth its weight in gold in terms of preparation for the big one, the Ryder Cup. The evidence from the 2014 and 2016 matches is that players who are involved in Malaysia capture the bug for team golf and use it as a stepping stone towards making it to the Ryder Cup.

Whoever Bjorn is given, and whoever he adds as his “wild card” calls, are making a statement of their own about wanting to be involved come Ryder Cup time.