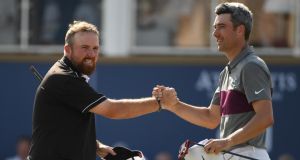 Rose looked set for a remarkable third win in succession to seal a second Race to Dubai title when he led by a shot with seven holes to play, only to bogey three of the next five.

That left the Olympic champion needing to eagle the last to overhaul Fleetwood, but his long-range attempt slid past the hole as Fleetwood looked on alongside his fiancee Clare and their seven-week-old son.

Meanwhile Shane Lowry enjoyed a fine end to the week as he carded a stunning final round of 63.

Lowry made 10 birdies and dropped just a single shot as he stormed up the leaderboard to take the clubhouse lead on 18 under par - but a birdie on the 16th was enough to give Rahm a one strike victory.

Paul Dunne however limped to a 75 on Sunday, leaving him on nine under par and in a share of 25th place.

Race to Dubai winner Fleetwood said: “It’s kind of amazing. It’s not kind of sunk in yet. It was great being out there today trying to win it. It really was out of my control over the last few holes.

“It was difficult being sat on the couch in the scoring area, just watching TV, not being able to do anything. You just have to watch how it unfolds and I felt for Justin a lot. I think how gracious he was shows a lot about his character.

“It’s the biggest day of my career for sure. The achievement of winning a year-long accomplishment is massive and it holds a lot of respect amongst your peers. It shows the level of consistency and the amount I’ve improved as a player and as a person.”

Fleetwood was struggling so badly with his game 18 months ago that he wanted to pull out of the BMW PGA Championship at Wentworth, fearing that he could not get the ball off the first tee.

But the 26-year-old from Southport has reaped the rewards of returning to his former coach Alan Thompson and employing his friend Ian Finnis as his caddie.

“Wentworth has always been like a benchmark to see where I’ve been and where I’ve come from, because that was my lowest moment,” added Fleetwood, who finished 58,821 points ahead of Rose.

“I can’t give the people around me enough credit. I know I am out there hitting the shots but there’s a lot of work goes into it that people don’t see.”

Rose began the final round with a one-shot lead and maintained that advantage thanks to a front nine of 32, but failed to get up and down from a greenside bunker on the 12th and found water with his approach to the 14th.

That dropped the 37-year-old into a three-way tie for fifth and back below Fleetwood in the Race to Dubai, with another bogey on the 16th ultimately leaving him too much to do.

“I felt like I was in complete control until the 12th hole then I kind of hit the buffers,” Rose said. “I don’t know where it went wrong on the back nine.

“I’m happy for Tommy. He’s battled hard all year. It’s good for him to finish it off.”

Rose had to settle for a tie for fourth on 17 under par, two shots behind European Tour rookie of the year Rahm, who secured his second victory of the season thanks to a closing 67.

The 23-year-old, who only turned professional in June last year, finished a shot ahead of Thailand’s Kiradech Aphibarnrat and Lowry, whose 63 equalled the lowest round of the week.

Masters champion Sergio Garcia and the South Africa duo of Dean Burmester and Dylan Frittelli finished alongside Rose, with Fleetwood in a tie for 21st after a final round of 74.