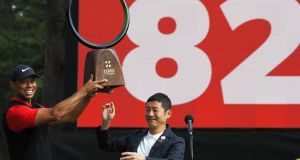 Tiger Woods’ victory at the Zozo Championship was his 82nd on the PGA Tour. Photograph: Toshifumi Kitamura/AFP/Getty

Tiger Woods was six-years-old the first time he crossed paths with Sam Snead, who played a two-hole exhibition in Southern California with Woods and said afterwards, “If the kid doesn’t burn out, he’ll be the greatest golfer the world has ever seen.”

Thirty-seven years later, Woods again found himself in Snead’s company. At the inaugural Zozo Championship in Chiba, Japan, Woods chased down Snead, completing a wire-to-wire win for his 82nd tour victory to pull even with Snead, the PGA Tour’s career titles leader. It was Woods’ 359th start, which means that he has won roughly one quarter of the tour events that he has played.

The site of Woods’ latest milestone was itself a nod to his eminence. Accordia Golf Narashino Country Club was the first Japanese course to host a PGA Tour event as the US-based circuit continues to spread into far-flung territories seeded by Woods’ renown.

Woods’ worldwide reach was borne out in the huge crowds - at times 20 fans or more deep - that turned out to catch a glimpse of him. His global influence was also evident in the form of his main challenger, Japan’s Hideki Matsuyama, whose golf journey was inspired by Woods.

After Woods won his first Masters, in 1997, Matsuyama, who was 5 at the time, said he repeatedly replayed the video of Woods’ 12-stroke victory. Matsuyama offered that anecdote in 2016, after he won the tournament in the Bahamas hosted by Woods, who finished 14 strokes behind in his return to competition after a back injury had sidelined him for roughly 15 months.

Matsuyama started the final round in second and that’s where he finished. Denied the opportunity to go head-to-head with Woods in the final grouping - to save time, the players weren’t re-paired before the start of their fourth round Sunday - Matsuyama ended up three strokes behind Woods, who birdied the last hole to close with a 67, 19-under par for the tournament.

“This is big,” Woods said in an 18th-green interview. “Hideki made it tight, a lot closer than people probably thought.” On winning his 82nd, Woods said: “Just crazy. It’s a lot. I’ve been able to be consistent most of my career.”

Woods had not played competitively in two months because of surgery in August to repair minor cartilage damage in his left knee. Snead was right to sound a note of caution about the unseen forces that could trip up Woods. But burnout has never been Woods’ problem. A broken-down body has been what has kept him from becoming, by all measures, the greatest golfer the world has ever seen.

As the 2018-19 season wore on, the only physical discomfort that Woods mentioned was a mild oblique strain that caused him to withdraw before the second round from his penultimate start, at the Northern Trust. Only after the fact did Woods acknowledge that his knee had been bothering him since before he claimed his first victory in five years at the 2018 Tour Championship. With that admission, the mystery of his sudden disappearance from leaderboards was solved.

After Woods won the Masters in April for his 15th Major title, the expectation was that the result would catapult him to great heights. It seemed entirely conceivable that he would clear the five-win bar that he set in 2013. Instead, he made only six starts last season after the Masters and his best finish after Augusta was a tie for ninth. “When he wins the Masters, you think he’s going to win another five majors straightaway,” Adam Scott, the former world No. 1 from Australia, said last month at the Safeway Open in Napa, California. “And then right now we don’t know exactly how his health is.”

Woods, who will turn 44 in two months, looked as fit as a player half his age, and his ball-striking and putting called to mind the Woods of lore, whose appearance on the leader board causes angina in his competition. From Francesco Molinari of Italy, who closed with a 74 at the Masters while grouped with Woods, to Keegan Bradley, who carded a 71 in the third round in Japan while playing alongside him, the Tiger effect would appear to be back in play. Twice in the final two rounds, Woods extended his lead to a Secretariat-like five strokes.

It’s not easy to win from way ahead. Ask Matsuyama, who saw his seven-stroke lead at the 2016 Hero World Challenge shrink to two before he righted himself. But Woods, ranked sixth in the world, is tougher to reel in than a marlin. He has won 44 of 46 times that he has held the outright 54-hole lead, including all 25 times that his advantage has been at least three strokes.

How does someone improve on a calendar year that includes a Masters green jacket and the Presidential Medal of Freedom? Leave it to Woods to figure out a way. His win Monday sets him up for at least one more magical moment: a playing berth on the United States’ Presidents Cup team that he will captain in Melbourne, Australia, in December. His would be a dual role filled by only one other American captain, Hale Irwin in 1994.

Woods’ win also revives his dream of returning to Japan next summer to represent the United States in the Tokyo Olympics. Don’t think that it hasn’t crossed his mind. “I’ve never played in the Olympics and I’m sure that I won’t have many more opportunities going forward,” Woods said last week, before the tournament.

Woods has to stay healthy and play more consistent golf than he did after the Masters to have a chance. Even if Woods’ play in Chiba turns out to be nothing more than a resplendent rainbow after a big storm, it was magnificent to behold. - NYT