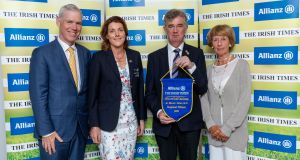 Perhaps there’s something in the air around Kilkenny these days; for, although they travelled the highways and byways from many parts of the south-east and Munster for the latest Allianz Irish Times Officers’ Challenge qualifier at Mount Juliet, it was those with golfing Cats who (technically) claimed all three places on offer.

Indeed, it was the host club team of captain Kevin McCartan, lady captain Freda Mullen and lady vice-captain Annette Hogan who claimed the top honours – by the narrowest of margins – from Waterford Golf Club, which is where the technicality comes in; despite its name, and no question of where their county leanings lie, the club is actually rooted on Kilkenny terrain.

Waterford, for sure, gave it a good shot at capturing top honours with a total of 79 points and, ultimately, would reflect on the par five 17th as being their undoing.

In a competition with two scores from three to count on each hole, the Waterford team of Eamon Cleary, Maria Mooney and Mick Nevin only managed one point on the hole which has water down the left off the tee. Cleary’s bogey six was as good as it got there for them.

As if to show the fine lines between winning and finishing runner-up, Mount Juliet were only too happy to take the grand total of one point managed between them on the par three 14th. Remember, this is the hole where John Daly once used a putter during the pro-am of the Irish Open and successfully found the green.

On this occasion, however, the downhill par three proved a tough encounter and Hogan’s double-bogey five for one point was all they walked away with.

It was to prove crucial in the long run, while McCartan’s brace of birdies – a two on the par three third for a nett eagle and a four on the eighth – were the highlights.

The final qualifier of the series takes place at Galway Bay on August 13th, while the grand final is set for The K Club on September 3rd when those teams who have already emerged from events in Portmarnock Links, Cork and Malone as well as the latest three from Mount Juliet will compete for national honours.

1 Tipping Point: DeChambeau’s transformation raises questions, but who will ask them?
2 Pete Sampras: The forgotten great with the best serve in the business
3 Super Rugby AU offers glimpse of rugby’s future if law changes are adopted
4 Cam Newton broke the mould: Can his flame be rekindled at the Patriots?
5 Klopp to rest Lallana to ensure he remains fit for transfer
Real news has value SUBSCRIBE