Man with the green glove leads race for green jacket 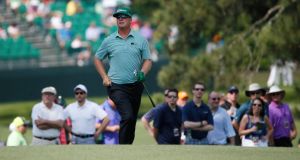 Charley Hoffman of the US jogs up to see his ball land on the seventeenth hole during the first round at the 2015 Masters Tournament at the Augusta National Golf Club. Photo: Tanen Maury/EPA

A player known for always wearing a green glove had his eyes on a matching jacket after making the ideal start to the 79th Masters on Thursday.

Charley Hoffman hit the first shot of the tournament proper after Jack Nicklaus, Arnold Palmer and Gary Player continued their role as honorary starters, but only after securing autographs from Nicklaus and Palmer.

And four hours later Hoffman was signing for a five-under-par 67 after finishing eagle-birdie-par-birdie to set the earliest possible clubhouse target.

“I was sort of scared,” Hoffman said of getting Nicklaus and Palmer to sign Masters flags to be auctioned for his own foundation. “Should I ask them, should I not ask them? My mind wasn’t really on golf really, I was watching those guys. Gary was gone but I’ll try at some point to get Gary to sign as well.

“Come the first tee I was a little nervous, hit a little hook over in the ninth fairway and was able to get back over to the green and settled nerves with a little two-putt par. I was able to make birdie on the second and third and that sort of calmed the nerves and I was ready to go.

“This is only my second Masters and obviously to follow those guys off the tee, it’s pretty lucky and special. I’m honoured that the Masters gave me that opportunity and I sort of took advantage of it. I like playing early and I like playing at a decent pace, so I knew this was going to benefit my game pretty well.”

Hoffman finished 27th on his only previous Masters appearance in 2011 and secured his return with his third PGA Tour title in the Mayakoba Classic in Mexico in November.

“First and foremost, I love Mexico,” added the 38-year-old, whose green glove is down to a sponsorship deal with environmental services company Waste Management. “I honeymooned down in Cancun, sort of a special place for my wife and I. (In November) we took the kids down there and it was a more relaxed week than most weeks on the PGA Tour.

“I was able to hang out by the pool with the family once you’re done practising. I was in a good state of mind, sort of like this week; got a house, got the family here, feel good and relaxed and it’s nice to have them around, and I think they put me in a good frame of mind.

“It worked today. Don’t know if it’s going to work tomorrow or the next day, but I’m going to try to keep my game plans I have going into it. If you hype this thing up too much, you’re not going to play good because you’ll let your nerves get the best of you.”

Before Hoffman teed off at 7:45am local time, Player had been able to claim bragging rights after joining Nicklaus and Palmer in getting the 79th Masters under way.

The trio formerly known as golf’s ‘Big Three’ — they have 13 Masters titles between them — continued their role as honorary starters by each hitting a tee shot on the par-four first hole.

And it was 79-year-old fitness fanatic Player who produced the longest drive by around 10 yards from 75-year-old Nicklaus, who recorded his first ever hole-in-one at Augusta National during Wednesday’s par-three contest.

Both men split the fairway on a hole ranked the third hardest on the course last year, but 85-year-old Palmer — who has been struggling with a shoulder injury which kept him out of the par-three contest — hooked his shot a short distance towards the ninth fairway.

Former Barcelona president Bartomeu arrested after club offices raided 13:01
Echoes of Berlin 1936 . . . Should Beijing Winter Olympics be boycotted? 10:01
The Offload: Ireland women must be allowed to move with the times 10:00
Tiger Woods touched by red and black tribute by fellow players 08:52
England prop receives death threats for not clapping Wales off the pitch 08:29
Here is your handy guide to sport on television this week