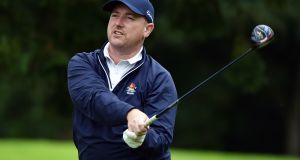 Joe Lyons of Galway driving at the eighth in the AIG Barton Shield at Carton House on Wednesday. Photograph: Pat Cashman

Last Sunday evening Joe Canning spent the bones of an hour addressing the Galway golf club Barton Shield and Senior Cup teams – it is the same panel of players – ahead of this week’s AIG-sponsored, All-Ireland Cup and Shields finals at Carton House.

The Galway hurling giant helped his county to end a 29-year hiatus since they last won the Liam MacCarthy Cup earlier this month. In the years between 1988 and 2017 the Galway hurling team lost six finals, a litany of disappointment with which his audience of golfers empathised.

Standing in a shadow cast by Royal Dublin (2015) and Warrenpoint (2016), Galway golf club negotiated a passage to a third consecutive final when they beat Tralee on the Mark O’Meara-designed layout, winning both foursomes to stand on the cusp of a Barton Shield success they last celebrated in 2007.

Joe Lyons, a member of that victorious side a decade ago and who partnered 17-year-old boys international Irish Luke O’Neill to victory in the top match against Tralee, mentioned the increased depth of quality within the team, a point Canning had referenced when speaking about the Galway hurlers triumph.

“Joe [Canning] made a very good point about the Galway hurlers this year, saying that the big thing for them was that the guys in training were pushing them hard; the big talk in their dressing room was actually who was making the numbers 16 to 26, who was going to be on the bench for the All-Ireland final.

“Every evening they trained, he said, there was depth there. So, basically, there’s no one there too comfortable in their position, and we’re even in a position, I don’t know who’s picked for the final yet, but we’ve guys on the sidelines who would be willing and more than capable of coming in for any of us.”

Galway’s Ronan Mullarney, who partnered Liam Power to win the second match, alighted on a different aspect of Canning’s speech.

“He was really insightful. He brought up the point that the best comparison he could make [between the sports of hurling and golf] was when he was taking a free in hurling.

“He has the same routine for the last umpteen years. He concentrates on his breathing, tosses the sliothar a certain way, spins it a certain way, wants to see a certain flight and that’s exactly what we are thinking about when we are hitting a shot. It was brilliant, nice of him to do that.

“He spoke for about 10 or 15 minutes and then we were asking him questions [for more than half an hour]. We were all star-struck, very quiet when he was talking.”

They’ll face last year’s nemesis and defending champions Warrenpoint, who despite the absence of Irish Close champion Jamie Fletcher, ruled out with an infected thumb, squeezed past the Leinster champions the Castle.

The 2016 Irish Amateur Open champion Campbell, the man who holed the winning putt in Ireland’s last two Home International Championship successes, explained the key to success on a day when the persistent heavy rain meant that preferred lies were in operation.

“Putting was definitely the key. We got off to a nice start, chipped in on the second for a two to go one up, holed a nice birdie putt on four for a half, they went OB on five with their second shot, so we moved two up and won seven with a par; we were very comfortable.”

Campbell paid tribute to his partner Gribben, whose touch on the greens was hugely influential on the back nine, getting putts on 11, 12, 14, 16 and 17 to remain tantalisingly out of reach of their opponents.

In the Junior Cup semi-finals Ballybunion’s Adrian Walsh contributed the match-defining point in a 3-2 victory, holing a five-foot putt on the 20th to edge the Kerry club one step closer to a trophy they last won in 2013 at Royal Tara.