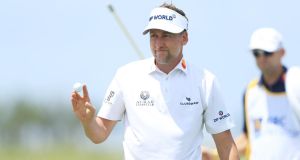 Ian Poulter shot a seven under par 64 in the opening round at Hilton Head. Photograph: Sam Greenwood/Getty

Ian Poulter is known as The Postman for a good reason. It’s a moniker that mainly relates to how he always delivers in the Ryder Cup; but, at one of his favourite PGA Tour venues, he again signed in with an impressive display of shot-making and course management to deliver a bogey-free seven-under-par 64 in the RBC Heritage at Harbour Town Golf Links in Hilton Head, South Carolina.

The Englishman’s near-flawless play - which earned him a share of the clubhouse lead alongside American Mark Hubbard - was in some contrast to that of world number one Rory McIlroy, playing in the tournament for the first time since 2009, who appeared out-of-sorts off the tee and uncomfortable in managing his way around the tight layout.

Having struggled in the final round at Colonial last Sunday, McIlroy’s game was again inconsistent as loose shots went left and right off the tee, on occasions getting a friendly bounce from trees to avoid greater danger. “I’m just missing tee shots. I’m sort of missing my 3-wood left and missing my driver right. If you’re in any way in two minds what to do off the tees around here, it can bite you. I didn’t get it into play enough to give myself shots or looks at hitting it close into greens and making birdies,” confessed the Northern Irishman after an opening round 72, one-over-par.

In fact, McIlroy’s plight seemed set to be much worse as he turned in three-over-par without a single birdie on his card to that point. However, he rescued matters somewhat with a birdie on the Par 5 fifth, where he hit 3-wood off the tee and an iron approach left off the green, and then a long birdie putt on the ninth, his finishing hole, to finally get a smile on his face.

“I wasn’t particularly comfortable out there. I played here once before in ‘09, and I just can remember not being that comfortable around here then, and it’s still sort of the same. I’m just not comfortable and sort of trying to pick lines and really commit to shots. I just wasn’t as committed as I need to be around here,” said McIlroy who faces a battle to survive the midway cut. The last time he missed a cut was at the British Open at Royal Portrush last July.

McIlroy admitted it was all a bit of a “struggle,” but sought to find a remedy on the range in his attempt to survive into the weekend.

While McIlroy struggled to find birdies, others had a field day and none more so than Jordan Spieth who responded to a triple bogey seven on the 12th, his third hole, where he drove into trees and his recovery shot ricocheted off a tree and out-of-bounds, to hit the birdie trail in spectacular fashion: the American, without a win since lifting the Claret Jug in 2017, had a run of six successive birdies from the seventh hole to sign for a 66.

Of that early setback, Spieth remarked: “I hit a tree, and it went about 20 yards to the right across the car path out-of-bounds. It wasn’t an out of bounds shot, it just got kind of a tough break.”

For Poulter, a return to a favoured layout brought dividends. Without a win on tour since the Houston Open in 2018, and without a top-10 finish anywhere since the WGC-St Jude last July, the 44-year-old Englishman finished with two birdies to put the icing on a fine display which, nevertheless, necessitated a post-round visit to the range to work on some driving issues. His iron play, approach work and putting, though, was flawless.

“It’s very important being bogey-free. Any time that happens on this golf course, you’ve obviously played pretty well. I think it’s a great course. I love coming here. It’s a fiddly, testy, tricky golf course. You have to kind of sometimes manoeuvre the ball around trees that are on the right or left edge of the fairway. So I like it. I like the small greens,” said Poulter.

British Open champion Shane Lowry and Graeme McDowell, a winner of the tournament in 2013, were both in the second wave of players in the opening round. Both will need to make big improvements to make the midway cut. Lowry, who finished third behind CT Pan in last year’s tournament, finished his first round three-over-par while McDowell hit a double bogey on the fourth hole on his way to a four-over-par 75.

1 Born to ride, born to win: Sam Bennett, the making of a green machine
2 Leinster look ready to step things up and burn off Saracens challenge
3 Connors now delivering on his massive potential
4 Keith Duggan: Surreal story of John Delaney needs to act as a wake-up call for FAI
5 Let’s face it, Saracens don’t really care that they are rugby’s most hated team
Real news has value SUBSCRIBE