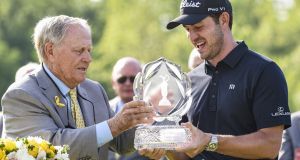 The tracking system was just one of several measures that will be put in place to deal with the coronavirus outbreak that has wreaked havoc with world sport and forced a reworking of the of the PGA Tour calendar.

Speaking on a “Virtual Sports Report” conducted via Zoom on Thursday by the Greater Columbus Sports Commission, Memorial Tournament director Dan Sullivan indicated a limited number of fans will be allowed on the course but movements would be restricted and monitored.

Other protocols, according the Golf Digest report, include limiting ticket sales, curtailing capacity in the clubhouse and public gathering structures, elimination of all grandstands, supplying face coverings for staff and volunteers and taking the temperature of everyone who enters the grounds.

The sale of draft beer and fountain drinks will be prohibited while all transactions will be restricted to credit cards.

“At any time we can know around the golf course how many people are collecting in a certain area?” said Sullivan.

The RFID technology has been used the last four years at the Memorial to monitor entrances and exits and identify choke points at Muirfield Village Golf Club but will play a much more important role at this year’s event.

The PGA Tour released a revised schedule in April. It outlined that the first four events will be played without spectators, starting with the June 11th-14th Charles Schwab Challenge in Fort Worth, Texas.

In addition to the Charles Schwab, the other tournaments slated to be held without fans are the RBC Heritage (June 18th-21st) in Hilton Head, South Carolina; the Travelers Championship (June 25th-28th) in Cromwell, Connecticut; and the Rocket Mortgage Classic (July 2nd-5th) in Detroit.

The first tournament tentatively preparing for spectators is the July 9th-12th John Deere Classic in Silvis, Illinois, followed by the Memorial.

“It’s a common misconception based on the initial news release that the first four events are not having fans – but it never really said our event is going to have fans,” John Deere tournament director Clair Peterson told Golf Digest.

“We’re trying to work through all of the obvious considerations, which includes all of the Illinois restrictions.

“Who knows? Memorial could be the first event with fans if we do not have them, but they’re in the exact same position of not knowing what will be permissible. But they have to make every preparation possible, as we are.”