Out of Bounds: Patrick Reed deserves a break

As the song goes, he does it his way. For better, or worse. Now as a Major champion 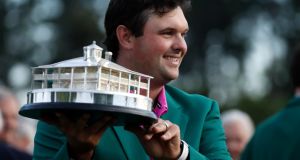 “Thanks for spitting in our face.”

The above social media posts had nothing to do with his golf, just that Reed has the temerity to support Notre Dame.

Reed’s support for the college - “#GoIrish!” was the hashtag the golfer used when he attended a college football game there as a birthday present last year - is something he has never tried to hide, but it might help explain why he was so clearly not a fan favourite as he went about his business in winning the Masters.

As someone who initially attended Georgia (which he left under a cloud, with an allegation of cheating from team-mates and another of underage drinking following him) to then move to Augusta State (which he led to back-to-back US collegiate titles), his support for Notre Dame was enough reason for many Georgians to root against him.

Then, there’s the family issue: he doesn’t have any communication with his parents or sister; not for six years. That’s sad, very sad; but it has nothing to do with golf, and - as far as his journey to a Masters green jacket is concerned - that he has taken the different path to the vast majority of tour players should in its own way be seen as vindication of his choices.

One of those choices was to discard any club sponsorship deal; so, rather than playing all 14 clubs of one manufacturer, he is open to putting whichever club he pleases into his bag. It was a risk, he missed out on a sizeable financial deal . . . and it was worth it, another example of Reed doing things his own way.

Reed used a Ping driver, Titleist and Callaway irons, Artisan wedges and an Odyssey putter. “It’s hard to believe that there is one company that makes 14 perfect golf clubs and a perfect golf ball for every player,” he remarked in explaining his position. Reed used a Titleist ProV1 golf ball.

Up to last year, Reed was tied into a club manufacturing deal with Callaway. “The biggest thing was I wanted to be different . . . on the equipment side, I’m just out there doing my own thing,” he explained of the decision to forsake money to be his own man. No constraints, as it were.

Indeed, money isn’t a factor for those plying their trades at the very top. There’s only so much you can have, only so much you can do with it. Reed’s win in the Masters has actually taken his career prizemoney upwards of $24 million, so the truth is he can afford to call his own shots when it comes to what 14 clubs he puts in the bag.

As the song goes, he does it his way. For better, or for worse. Now, as a Major champion, there can be no doubt that it is better for him. He doesn’t need to be popular, to be universally liked. In his own world, everything revolves around him. And he can rest assured that in at least one arena, he will be acclaimed as one of their own: that is when he next attends a Notre Dame football game.

Prior to the final round, Manchester United had posted a tweet of encouragement to Rory McIlroy wishing him well and looking forward to welcoming him to Old Trafford as Masters champion. That one will have to wait.

For Reed, the invitation to another Notre Dame match won’t be for his birthday, it will be as a celebration for doing it his way. As Brian Kelly, the coach to the “Fighting Irish” put it in a post-Masters tweet: “Congrats to Patrick on his Masters victory - can’t wait for you to bring the green jacket to a game this fall!”

Give the guy a break.