Foley and Hickey share Irish Close lead ahead of final round 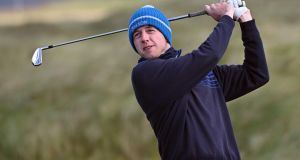 Hugh Foley’s six-under 66 gave him a share of the lead heading into Sunday’s final round of the AIG Irish Amateur Close. Photograph: Pat Cashman Photography

Hugh Foley left the driver in the bag and fired a six-under 66 to snatch a share of the lead heading into Sunday’s final round of the AIG Irish Amateur Close at Rosapenna Hotel and Golf Resort.

The Dubliner (23) only used his driver once on the punishing Sandy Hill Links and made five birdies and an eagle in a two-club wind at the Donegal venue to share the lead with Galway Bay’s Andrew Hickey, who shot 71 on one-under-par.

They lead by two shots from Baltinglass’ Joseph Byrne (17), who also shot 66, and Carton House’s Marc Boucher, who shot 69 with Castle’s Robert Moran a shot further back after a 70.

However, just six shots separate the top 12 and given the demanding nature of the course and the Donegal weather, the Championship still looks wide open.

Friday’s 25 mph winds gave way to more benign conditions and after only Kinsale’s Gary Ward broke par in the opening round, seven players dipped into the red on day two as the scoring average fell from 81.32 to 77.34.

Foley was thrilled with his score and having played with Ward for the first two rounds, he knew how to tackle the course.

“I watched Gary play yesterday, and he made it look easy. I just played simple off the tee, hit one driver and my long irons were really good today, and I putted a lot better, which was good,” he said.

The Leinster interprovincial birdied three of his first five holes, bogeyed the 10th but then birdied the 12th and 15th and eagled the 17th for his 66.

“The improved weather made it seem easy today. It was still a tricky day - maybe a one or two-club wind, but it felt so much easier having played yesterday in horrendous stuff.”

He is no stranger to Rosapenna, playing the course several times as part of a coaching camp with coach Geoff Loughrey and he is not afraid to think about winning.

“It would be huge,” he said. “Obviously, it is a different format this year, but I will just stick to the game plan. It is a really good game plan that I have, and I am executing it well. I am looking forward to tomorrow.”

Overnight leader Ward shot 77 to slip back to tied sixth on three-over as Hickey (21), who credit a moved to Galway Bay from his home club Ballyhaunis as key to his improved play this year, shot a steady 71.

“I left a couple of shots out there but all in all, I think it was a good day,” Hickey said. “If you had told me before the week that I was going to be one-under after 36 holes, I’d have thought you were mad. It was certainly a good day.

“I haven’t really thought about winning yet. There are still 18 holes to go, and there are a lot of good lads in the field, so we will see how it goes tomorrow.”

Boys international Byrne made seven birdies in his 66, reeling off four in a row around the turn to share third with the in-form Boucher (23).

“I played well, didn’t miss many greens and started holing putts around the middle of the round,” said Byrne, who missed few greens in the easier conditions and took advantage with the putter.

“It was tricky today but nothing compared to yesterday. Yesterday was outrageous. It was fair, but it was just so tough. Today was a lot more playable.”

The cut for the top 39 and ties fell at 12-over 156 with Bridgestone Order of Merit leader Alan Fahy safely through to the final round on nine-over in the final counting event on nine-over.

He is under pressure from third-placed Boucher, who fired five birdies in a three-under-par 69.

If Fahy finishes outside the top-20 on Sunday, Boucher knows that a tied fourth result or better could be enough to clinch the Order of Merit title.