European Tour moves on to Scotland as the field remains thin 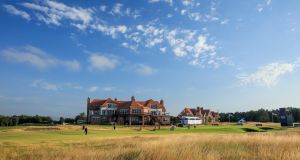 The Scottish Open gets underway at North Berwick this week. Photograph: Getty

The European Tour moves to Scotland this week for a Rolex Series event, the Aberdeen Standard Investments Scottish Open at the Renaissance Club in North Berwick that carries a €7,000,000 prize fund, a hefty increase in remuneration terms on last weekend’s Dubai Duty Free (DDF) Irish Open at Galgorm Castle which had an overall fund of €1,250,000.

The Irish Open was a Rolex event from 2017-2019 - American John Catlin won the tournament and received a cheque for €199,750 whereas Spaniard Jon Rahm pocketed just over a million euro for each of his two victories in 2017 and 2019 - and hope to regain that status having been downgraded due to the decrease in purse size.

One positive to emerge from last weekend was the feedback from the players who praised the quality of the greens at the Ballymena venue and also the test provided by the golf course.

Coronavirus, the forced rescheduling from the Irish Open’s traditional slot in the summer and a field without the pulling power of a handful of global marquee names were significant factors but as long as the pandemic is prevalent the Trans-Atlantic travel is likely to remain relatively modest, especially for those whose primary playing allegiance is to the PGA Tour in America.

The Scottish Open offers a classic example of how money - the winner’s cheque this week is €1,035,098 - in the current Covid-19 climate does not provide a persuasive argument to travel. The tournament has an auspicious roll of honour in recent times, notable winners include Rickie Fowler (2015), Justin Rose (2014) and Phil Mickelson (2013) but none will be present this week in North Berwick.

Rose was to have been in the field but is not amongst the confirmed entries for a tournament that has attracted just seven, Tommy Fleetwood (16), Matt Fitzpatrick (17), defending champion Bernd Wiesberger (32), Lee Westwood (42, Danny Willett (43), Matt Wallace (46) and Erik van Rooyen (48) of the world’s Top 50 golfers.

It’s not as if the Scottish Open is up against a high profile event on the PGA Tour - this week it is the Sanderson Farms Championship in America - and in some respects it should have benefitted from being a week out from the European Tour’s flagship event, the BMW PGA Championship at Wentworth.

Northern Ireland’s Graeme McDowell, a former winner of the Scottish Open (2008) and European Ryder Cup captain Padraig Harrington constitute the Irish representation at the Renaissance Club, both coming off missed cuts, McDowell in the Dominican Republic where he was defending a title he won last year, and Harrington, at the Irish Open, playing his first competitive golf for over six months.

Cormac Sharvin, Jonathan Caldwell, Gavin Moynihan and Niall Kearney are on the reserve list for North Berwick. Lowry, who also failed to make the weekend at Galgorm Castle, intimated that he will take time off to spend with his family having been separated from them following a nine week stint on the PGA Tour.

It would suggest that he may not play Wentworth, while another likely absentee from the BMW PGA Championship is world number four, Rory McIlroy, who had previously stated that he didn’t see himself returning to action in Europe in the foreseeable future.

Ruaidhri McGee, Robin Dawson and Paul McBride will compete in this week in the Italian Challenge Open at Golf Club Castelconturbia on the Challenge Tour.

The 23-year-old British Amateur champion, James Sugrue, who finished in a tie for 66th place at the Irish Open, is looking forward to getting plenty of practice ahead of teeing it up in the US Masters in November, his second appearance in a Major following the recent US Open at Winged Foot.

The Mallow native explained when asked what was on his agenda: “Lots of practice really (as) everybody knows that Augusta is a tricky course; it’ll be interesting to see what it’s like in November. (I’m) not sure if there are many tournaments I can play in. Amateur-wise I think there’s one,” he said, a reference to the Irish Amateur Close Championship in Rosapenna next month.

He added: “I’m not sure if I’m going to play in it or not. There’s lots of work to be done between now and November and I’m looking forward to cracking into it when I get home.”