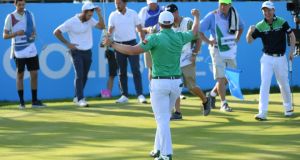 Ireland’s Gavin Moynihan almost doubled his career earnings on the European Tour for two days’ work after partnering Paul Dunne to victory in the second edition of GolfSixes.

Moynihan, 23, who has not made a halfway cut in eight events this season, chipped in for a birdie on the first play-off hole to secure victory over South Korea in the semi-finals at Centurion Club in St Albans.

And the Irish pair then made three birdies and an eagle in the space of five holes to beat France’s Romain Wattel and Mike Lorenzo-Vera 2-0 in the final to secure the first prize of €100,000 each.

“It’s unbelievable,” said Moynihan, who had previously earned €128,000 on Tour, the vast majority coming from a tie for 14th in last year’s Irish Open. “It’s been a great week for both of us. To get it done today means a lot when you’re representing Ireland.

“The course set up well for us and we had fun. It was the best fun I’ve had on a golf course since turning professional and a great few days. Our flight’s in two hours so we’re not making that, so we’ll be booking a new one for tomorrow with probably a hangover!”

Dunne, who played alongside Moynihan in a record Walker Cup victory in 2015 and won his first European Tour title in the British Masters last year, added: “It’s a fun event but when you have the tricolour beside your name it becomes a little bit more serious.

“We’re happy to represent Ireland well, have a nice trophy under the belt and it sets well to kick on for the rest of the season.”

Ireland had earlier beaten the England Women’s team of Charley Hull and Georgia Hall 2-0 in the quarter-finals, while the European Women’s team of Mel Reid and Carlota Ciganda lost by the same score to Australia.

But the fact that both teams, rank outsiders before the start, advanced from the group stages was an achievement in itself and has already prompted interest from some of the biggest names in the women’s game.

“I think it’s a huge success for women’s golf,” Reid said. “Hopefully we’ve opened a few more eyes to women’s golf and shown that we can compete and that we are pretty good at what we do, and we work very hard at what we do.

“Also, I wanted to point out that loads of the girls in America have been saying how much they have enjoyed watching it and (former world number one) Lydia Ko has already messaged us saying she’s absolutely desperate to get on a team next year.

“I really felt we could have done something very, very special here. I feel like we have, but I’m just a bit gutted that we haven’t at least got through to the semi-finals.”

England’s Eddie Pepperell, who partnered Matt Wallace to defeat in their quarter-final with France, would like to see the event become a “festival” of golf, with amateurs the next possible addition to the field.

And European Tour chief executive Keith Pelley, who saw more than 10,000 spectators come through the gates, added: “There’s no question that we are on to something special here. It’s a format that can complement the 72-hole tournament and revolutionise the game.”

1 Ian O’Riordan: An education in race and running during college days in America
2 Betting shops face uncertain future as they prepare for Monday reopening
3 Tianna Bartoletta: ‘After you’ve gotten your medal, you become black in America again’
4 Timo Werner giving up on Liverpool dream on path to being truly wanted
5 Premier League stadiums to be divided into red, amber and green zones
Real news has value SUBSCRIBE