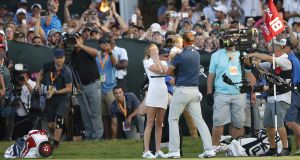 Dustin Johnson holds his son Tatum as his wife Paulina reacts after he birdied the final hole to win the 116th US Open Championship at Oakmont Country Club in Oakmont, Pennsylvania. Photo: Michael Reynolds/EPA

As if the pressure of closing out a Major wasn’t tough enough for all those in the cauldron, a rules quagmire had players not knowing if they were coming or going in the 116th US Open championship here at Oakmont Country Club: it led to some rather grotesque shot-making, some unbelievable decision-making, some bizarre outcomes and unprecedented confusion.

If the catalyst for such GUBU-ish behaviour was dithering of the most extreme kind from the USGA over whether or not Dustin Johnson should be given a one shot penalty for causing his ball to move on the fifth green, it led to a situation where confusion reigned until it was determined in the recorders’ cabin that there was an infringement and he was assessed a one shot penalty.

But the damage was done long before that, in many ways. And Johnson – in fairness – took matters into his own hands out on the course. A year after losing out to Jordan Spieth at Chambers Bay, in trying circumstances, the American finally got his hands on a Major title with Shane Lowry the fall guy on this occasion.

One by one, players imploded. Sergio Garcia, a career CV devoid of only a Major, any Major, plunged his drive into a bunker on the 15th where it plugged with only a few dimples visible. Double-bogey. Jason Day, the world number one, was on a late charge until he found the bunker known as Big Mouth on the drivable Par 4 17th. He went from bunker to bunker and then compounded his error by failing to get out of the second at the first attempt. Double bogey.

So it was that the championship – with uncertainly on the actual scoring hanging over the players’ heads as they fought to the end – played out under a haze, but Johnson stayed calm and ultimately made that question mark over a possible penalty irrelevant.

Johnson shot a final round 69 for four-under-par 275 that gave him victory, one that had a sweet taste. He finished with a four stroke winning margin over Lowry, Jim Furyk and Scott Piercy who shared second place 279.

Two of the world’s top players gave their tuppence worth on Johnson’s rules predictament. “Lemme get this straight.. DJ doesn’t address it. It’s ruled that he didn’t cause it to move. Now you tell him he may have? Now? This a joke?” tweeted Jordan Spieth, whilst Rory McIlroy - who missed the cut - tweeted: “This is ridiculous... No penalty whatsoever for DJ. Let the guy play without this crap in his head. Amateur hour from @USGA.”

Their ire was understandable, but Johnsonn – to his credit – ensured that any discussions in the recorder’s would not matter. He had won the championship on the course, and who could begrudge him?

For Lowry, who struggled in the final round, the taste was rather different, a bitter one that was hard to take. It had seemed as if his time had come, only for Johnson to steal the stage from him.

Lowry had entered the final round with a four stroke lead over Johnson and Andrew Landry but the rhythm of the first three days had tightened on this day of days and the Offalyman laboured on the front nine, failing to find a birdie and turning in three-over 38.

His tee shot on the first was pulled left into the rough, and he had to make a clutch eight-footer for par, but his approach to the second spun back off the green and he failed to get up-and-down and signed for a bogey. Up ahead, Johnson had birdied the hole and, suddenly, his lead was two and he was being sucked into a dogfight.

Lowry hit good drives on the third and fourth, parring both. On the Par 5 fourth, he’d waited to have a crack for the green in two but his fairway wood approach from 197 yards ploughed into heavy greenside rough and he was forced to play away from the flag. He two-putted from 25 feet for his par.

Then, on the fifth, he pulled his iron tee-shot into a fairway bunker, caught his recovery heavy and finished in heavy rough close to the hazard and actually did well to escape with a bogey.

Another bogey on the Par 4 10th had him fighting, and, finally, a birdie on the 12th allowed him to hang on for dear life. It was not to be, though.

And, then, the dream evaporated for Lowry: a run of three successive bogeys, from the 14th, all of them three putts as the putter was transformed from an obedient tool into a troublesome implement. No longer did it seem as if it were part of his body.

To roars of “DJ - DJ” from the crowds in the grandstands around the 18th, Johnson accepted the acclaim and finished with a magnificent approach shot to finish with a birdie; a fitting finish for an impressive final round performance and a maiden Major.

For Lowry, the experience was not a pleasant one. A round which had started with such great expectations finished with huge disappointment. He need look no further than Johnson to know that there is always a chance for redemption.

1 Ken Early: Despite coronavirus, Premier League season must be finished if at all possible
2 Police investigating after Jack Grealish is pictured at a road incident
3 Summer tours next in line for postponement as rugby assesses options
4 My favourite sporting moment: When Zidane glided through Brazil in 2006
5 ‘Magnificent’ Conor Connelly remembered after sudden death
Real news has value SUBSCRIBE