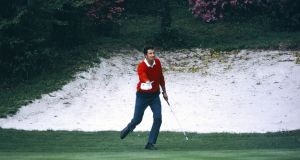 There are unremarkable Masters winners. At the opposite end of the scale is George Archer, a player worthy of the recognition on the 50th anniversary of his triumph that could not be forthcoming when he was alive. Only after his death, in 2005, did an incredible secret emerge to the wider world: Archer forged a career at the top level while illiterate.

“It was a golf thing,” says Donna Archer, George’s widow. “He didn’t want to give his opponents any advantage over him. He knew that if somebody knew about it and said something, that he probably wouldn’t be able to handle it. He would crack.”

Donna will return to Augusta National this week, grateful for the kindness shown to her by the club, but also inevitably drawn towards reflection. Six weeks after meeting George, in 1960, she learned of the reading and writing impairment that was not absolute – he had the skills of perhaps an eight-year-old – but sufficient to seriously affect their lives. “I thought: ‘Oh, no problem, I’ll teach you how to read,’” she recalls. “But I wasn’t able to.”

If George felt an understandable bitterness towards a system that treated him poorly – it emerged that his San Francisco high school had been graduating pupils who did not know how to read or write – he found sanctuary in golf. He was a prolific winner and a renowned, brilliant putter.

“He could recognise some names,” Donna says. “When he looked at the scoreboard he knew that he was on the left side and his friend Larry Ziegler was on the right. But if somebody new came on the board, he wouldn’t recognise that. When we weren’t together, he had templates that he could copy. For example, he had a cheque that he could copy for a certain amount of money; if he needed to write one for a different amount, he would call me and I would walk him through it.

“When he travelled overseas I was with him so I would fill out all the paperwork.

“He was very good with directions, he never got lost. He was able to find his way around a map, which is different from reading the cities on it. He had a general sense of direction. I think this may have been why he was such a good putter; he had incredible spacial intelligence.”

On Sunday April 13th 1969, George Archer held a three-shot advantage at the turn. A $20,000 first prize was within view. “I started practising my acceptance speech,” he later said. “I heard myself and said: ‘You better shut up, you have nine holes to play.’”

Archer hit a four-iron into the pond at the 15th, meaning his lead was gone. “I thought that was the end,” says Donna. “I didn’t think he would be able to recover from that.”

Recover he did. Arnold Palmer proclaimed Archer’s shot into the 72nd hole as among the finest he had seen. Archer held off Billy Casper, George Knudson and Tom Weiskopf by one. “It was magical,” Donna says. “He had almost won the week before in Greensboro but shot a bad score on Sunday.

“We drove from North Carolina to Augusta and he was just upset about that. Monday, Tuesday, Wednesday of the Masters he was sick with flu. I don’t think he thought he could win it; he thought he wasn’t going to be able to get out of bed.”

There are further strands to Archer’s amazing tale. One of George’s daughters, Elizabeth, became the first female caddie in Masters history when working for her father in 1983. The pair finished 12th.

Mike Jamieson forged a close friendship with Archer that lasted almost 40 years, encountering scenarios that made sense much later. Archer created a scene rather than place a message on a scorecard for a club pro who produced a hole-in-one in his company. The Masters champion procrastinated over penning a good luck card to Jamieson as he headed for college. “I’ll send you a photo,” Archer said. If ever asked whether he wanted to read the sports pages, Archer requested only scores.

Archer never played in a Ryder Cup. In a 1995 Q&A written by Jamieson, he stated that he had not completed paperwork to join the PGA of America, as would be necessary in respect of the biennial event. “He didn’t want to lie so his deal was: ‘I didn’t fill in and send the forms’ but he couldn’t say he couldn’t fill them out,” Jamieson says. “And there was a written test that he couldn’t take.”

The most uplifting element to this story relates to events since George’s death. Every October at the Peninsula Golf and Country Club in San Mateo – where he was once a caddie – the George Archer Memorial Foundation for Literacy hosts a pro-am tournament. The photograph on the invitations is the very one Archer sent to Jamieson.

Close to $1m has been raised to “support tutoring programs for people afflicted with learning disabilities that interfere with their ability to process written communications”.

Donna’s motivation to set up the charity was straightforward. “I didn’t want any child to experience the pain that George experienced,” she says. “George had to overcome more than was imaginable. You think of someone carrying a cement block on his back and on his head. He just kept moving.

“He won 46 tournaments in his career, he won over five decades. It’s extraordinary. You see people overcome things; you don’t see them overcome them for the length of time that George struggled.”

During those battles, there was one triumph that every golfer dreams of. George Archer was one of Augusta National’s greatest champions. – Guardian

1 Seán O’Brien: Anger over my parents’ break-up has never left me
2 Ireland out to make a bold statement of intent against callow Italian side
3 Six Nations - Ireland v Italy: Kick-off time, TV details, team news, standings and more
4 Touching response to Rashford’s clarion call reveals very best of England
5 Ireland entitled to feel quite at home with their sparing use of residency rule
Real news has value SUBSCRIBE

Seán O’Brien: Anger over my parents’ break-up has never left me 09:30
Touching response to Rashford’s clarion call reveals very best of England 07:00
Michael Walker: Is De Gea an answer again amid the questions at United? 06:00
Greville and Westmeath relishing life in the top tier 06:00
Nicky English: Unique season will bring unique set of challenges 06:00
Here is your handy guide to sport on television this week