Five talking points ahead of the US Masters

Can Rory McIlroy win the career grand slam and what next for Tiger Woods? 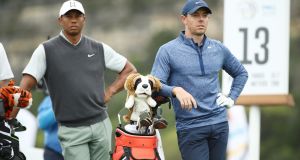 The first golf major of the year is just days away. Here, we look at five talking points ahead of the Masters at Augusta National.

It is the question that has been asked ever since McIlroy won the third leg of the slam at Hoylake in 2014 and is destined to be repeated until the Northern Irishman slips on a green jacket or hangs up his spikes. In his four attempts to date, McIlroy has finished fourth, 10th, seventh and fifth, but stumbled to a closing 74 last year while playing in the final group on Sunday with eventual champion Patrick Reed. Victory in the Players Championship at Sawgrass followed five straight top-six finishes to start 2019 and made McIlroy the bookmakers’ favourite for Augusta, where a fast start could be crucial to his chances.

What next for Tiger Woods?

This time last year Woods was vying for favouritism with McIlroy and Dustin Johnson having finished 12th, second and fifth in his previous three events following his remarkable recovery from spinal fusion surgery in April 2017. However, so far this season the 43-year-old saw a run of three encouraging performances halted by a neck injury which forced him to withdraw from the Arnold Palmer Invitational, after which he finished a distant 30th in the Players Championship. Winning a fifth green jacket would be a fairytale way to set the seal on one of the greatest comebacks in sporting history and it would be a brave man to rule out the possibility.

Is a shock winner possible?

Since Darren Clarke and Keegan Bradley won the last two majors of 2011 when ranked 111th and 108th in the world respectively, the lowest-ranked winner of any major has been Jimmy Walker, who was 48th when he won the 2016 US PGA Championship. In 2018, Patrick Reed was ranked 24th before his Masters victory, Brooks Koepka ninth ahead of the US Open, Francesco Molinari 15th before the Open and Koepka fourth ahead of the US PGA.

Can Reed defy the odds?

Only Jack Nicklaus, Woods and Nick Faldo have won back-to-back Masters titles and the chances of Reed doing the same would appear slim. He started the year by finishing 25th in a 33-man field in the Tournament of Champions and has yet to record a top-10 finish, struggles which prompted his wife Justine to call in renowned coach David Leadbetter for help, while Reed was in the middle of a round at the Valspar Championship. He did at least beat his predecessor as Masters champion, Sergio Garcia, in a final group game at the WGC-Match Play, but failed to reach the knockout stages.

Will a return to Augusta help Spieth stop the rot?

Jordan Spieth’s record in the Masters is quite simply remarkable. He finished second on his debut in 2014, won the title in 2015 and finished runner-up the following year after squandering a five-shot lead with nine holes to play. A relatively modest 11th place in 2017 – is his worst finish in five appearances – and last year he led after 18 holes for the third time in four years following an opening 66, before almost snatching the green jacket away from Reed with a closing 64. However, since leaving Augusta ranked third in the world, Spieth has slipped to 32nd in the rankings and looks bereft of confidence over short putts.