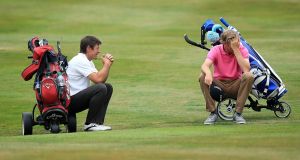 The European Tour are to implement a four-point plan to tackle slow play from next season. Photograph: Photograph: Jan Kruger/Getty Images

The PGA European Tour has adopted a no-holds-barred approach in its crackdown on slow play, with a four-point plan to be implemented from next season that will see players penalised shots and hit in their pockets for failing to keep up with the pace of play.

This new policy is not a reaction to the recent controversy of Bryson DeChambeau’s antics on the PGA Tour, as the European Tour instigated its initial review of slow play on the circuit in early-July before that incident which again highlighted the issue.

With a four-point plan – involving regulation, education, innovation and potentially reduced field sizes – to come into play at the start of the 2020 season, this initiative will at least be seen as a constructive effort to combat slow play.

Under the new regulations, players, when out of position and either being monitored or timed, will be given a one-shot penalty after incurring two bad times in a round. Interestingly, fines for consistently slow players will be significantly increased: for example, a player who is timed 15 times in the 2020 season will have to pay €28,375 in fines as opposed to €9,800 this season, effectively a 190 per cent increase.

There will also be in increased focus on educating players about the rules, with every player required to pass an online rules examination.

A decision to reduce field sizes from 156 to a minimum of 144 at fully sanctioned events on the European Tour (so long as all entered players in Category 18, the final 111-125 on the previous season’s Race to Dubai, and above make it into the event) has also been taken in order to create space for referees to push groups over the Thursday and Friday rounds. Also, larger starting intervals will be built into play on Saturday and Sunday to create a better flow between groups.

“We have had some very interesting and robust debates in the process of agreeing the new initiatives,” said tournament committee chairman David Howell. “But with a combination of education, deterrents, technology and modifications to the fields, we believe we have arrived at a set of fair and proportional measures to improve the experience for everyone involved in the game.”

As expected, three Irish players – James Sugrue, Conor Purcell and Caolan Rafferty – have been selected on the Britain and Ireland team to face the United States in the Walker Cup at Royal Liverpool on September 7th-8th.

The trio have enjoyed significant wins this year, with Sugrue claiming the British Amateur, Purcell the Australian Amateur and Rafferty winning the West of Ireland.

“I’ve got a little bit of work to do to maintain my LPGA card so hopefully I can take this win and use this as momentum. If I can win here – I played against Charley Hull and she’s one of the best players in the world – so if I can do it against her, I can do it out [on the LPGA] as well. It’s big for my confidence.” – Stephanie Meadow on holding off the world number 29 to win the inaugural ISPS Handa World Invitational at Galgorm Castle. Meadow resumes her LPGA Tour playing schedule at this week’s Canadian Open.

“It’s disappointing. I wish I could have [made it to Atlanta]. Last year culminated in a pretty special moment for me and would have been nice to go back there [to defend] but I’ll be watching the guys on TV.” – Tiger Woods on failing to make it into the top-30 on FedEx Cup standings who play in the Tour Championship.

The 109th staging of the Irish PGA Championship will break new ground when it is staged for the first time at Bunclody Golf & Fishing Club in Co Wexford. The championship’s long history is reflected in a roll-of-honour that includes 10-time champion Christy O’Connor Snr and also Pádraig Harrington, who won on six occasions, including a hat-trick of titles from 2007-2009. Among those playing in this year’s 36-holes championship are former tour players David Higgins, Damien McGrane, Simon Thornton and the in-form Colm Moriarty.

Congrats to my friend @JustinThomas34! Justin played fantastic golf this week (not once but twice setting @MedinahCC record). Got off to nervous start today which was understandable. Justin righted the ship midway thru front 9, started driving ball better & simply played better! – Jack Nicklaus tipping the cap to Thomas, the BMW Champion and new leader of the FedEx Cup with its $15 million payout to the champion following this week’s Tour Championship.

Fun week back competing on home soil @GalgormCastle for the @World_Inv_Golf Proud of everything the team @modestgolf & @ISPSHanda are doing to promote womens golf. Big thanks to @jordan_hood1995 for all the words of wisdom on the bag and making me look good on the greens – Leona Maguire, who finished tied-6th behind Stephanie Meadow. Maguire will return to the Symetra Tour next week where she continues her bid for a full LPGA Tour card.

Big thanks this week to @modestgolf and @ISPSHanda for a brilliant staging of the @World_Inv_Golf Love seeing and being a part of initiatives to show why men’s and women’s golf can be on an equal footing. Hope @LETgolf gets to show what it has to offer next time too #golfwins – Meghan MacLaren adds to the plaudits.

In the Bag: Justin Thomas at the BMW Championship