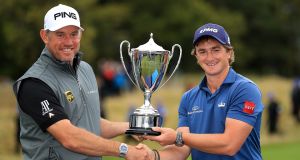 Lee Westwood presenting Ireland’s Paul Dunne with the trophy after his victory in the 2017 British Masters at Close House Golf Club in Newcastle upon Tyne. Photograph: Andrew Redington/Getty Images

So far, so good . . . now, the European Tour’s rebooting – which got off to a seamless enough restart with the two back-to-back dual badge events in Austria – clicks into something of a higher gear with this week’s British Masters, which runs from Wednesday to Saturday at Close House resort near Newcastle in England.

Unlike the stellar fields of previous years, however, the tournament – with a reduced prize fund of €1.25 million – will be missing most of Europe’s leading players who have positioned themselves stateside with the PGA Tour’s earlier restart and bigger pots of prizemoney, and of course given the lead-up time to the upcoming WGCs, US PGA and FedEx Cup series, proving more attractive.

In fairness to Lee Westwood, the lure of greenbacks on the other side of the Atlantic didn’t tempt him to jump ship. Westwood has stayed put to host the tournament, just as he did in 2017 when Paul Dunne spectacularly won with a hole-out on the finishing hole to outgun a watching Rory McIlroy.

Really it is not so much about the strength of the field this time around as the fact that the event is taking place at all.

The European Tour ground to a halt after the Qatar Masters in early March due to the Covid-19 pandemic and the return to any type of schedule, with protocols put into place and tested for the past two weeks in Austria, has only come about with some outside the box thinking that will see an initial run of six tournaments confined to England and Wales, the so-called UK Swing.

For those who perform, though, there is the added incentive of exemptions into the US Open at Winged Foot in September.

Westwood, whose win in the Abu Dhabi Championship back in January was the 44th worldwide of his career, has stuck to his commitment to hosting the British Masters.

“It’s a tough job and a tiring one at that. It was tough to do it [in 2017] that week and play golf too. I sort of ran out of steam towards the end, but it is going to be different this year. No crowds, less media, which will allow me to focus more time on trying to win the golf tournament.”

No word just yet on when, or if, the DDF Irish Open will be added to the tournament schedule (a case of fingers crossed that it actually does go ahead) but some good news on the competitive front with confirmation that the Northern Ireland Open will go ahead at Galgorm Castle outside Ballymena in Co Antrim.

The Challenge Tour event will have a €200,000 prize fund and will be the first of back-to-back events in Ireland on September 3rd-6th, with the Irish Challenge – at a venue yet to be confirmed – taking place the following week. The tournament is supported by the R&A’s Covid-19 support fund.

“While there will be no formal graduation to the European Tour this year, adding events like this to the Road to Mallorca will provide playing opportunities and experience for the stars of the future and is hugely important to our members in the current circumstances,” said Jamie Hodges, head of the Challenge Tour in confirming the event.

Séamus Power – who contended in the recent Rocket Mortgage Classic, eventually finishing tied-12th – returns to the PGA Tour for this week’s PGA Tour stop at the 3M tournament in Minneapolis. With Rory McIlroy, Shane Lowry and Graeme McDowell all taking a week’s break, the Waterfordman is the only Irishman in the field.

Paul Dunne – who hasn’t played competitively since the Portugal Masters last October and who has undergone successful surgery on a wrist injury – returns to action at the British Masters at Close House as a former champion. Dunne is joined in the field by Cormac Sharvin and Jonathan Caldwell. Gavin Moynihan is first reserve and will hope to get a place in the field if any player withdraws before Thursday’s first round.

“It was nice to get my feet wet and compete and play again” – Tiger Woods, on returning to competition at the Memorial (where he finished tied-40th). Woods was playing competitively for the first time in five months and is set to play in the US PGA in a fortnight’s time but has yet to announce if he will play in next week’s WGC-FedEx St Jude Invitational in Memphis.

In the Bag: Jon Rahm at the Memorial Tournament

Good luck to everyone this week at @british_masters and especially to your wonderful host @WestwoodLee have an amazing week guys – Tommy Fleetwood who has headed stateside to serve out his two-week quarantine process ahead of resuming tournament play at this week’s 3M tournament and then playing in the upcoming WGC-St Jude and the US PGA, which means he misses out on the British Masters on the European Tour.

Not that it’s even worth debating if a 4 handicapper could make it on the @LPGA (which some are claiming). But, just for the record – I’d take on any 4 handicapper in the world and fancy my chances. But there are plenty women golfers I’d ask for 1 shot a side!!! – Thomas Bjorn giving his tuppence worth to the nonsensical social media debate that a male four-handicapper could beat an LPGA Tour player.

Collin Morikawa (playing with Phil) is just getting a glimpse into his future after 30 years on Tour, having millions in the bank and being a complete fruitcake – Eddie Pepperell giving his take on Phil Mickelson using a putter from 35 yards off the green during the final round of the Memorial.

On the morning of the final round of the 142nd British Open at Muirfield, there was a sense of deliverance. That, finally, Lee Westwood – one of the most respected players on the European Tour – would lay claim to a Major championship to put gloss to a storied career. The Englishman held a two-stroke lead over Tiger Woods and Hunter Mahan going into the final round. Of course, the presence of Woods in such close proximity added some menace to Westwood’s quest.

As it happened, it wasn’t Woods but another American who proved unbeatable on that day. Phil Mickelson had started the final round five strokes behind. However, a final round 66 for a three-under-par 281 – on a day when most of the other contenders laboured – meant Lefty all but knew he had won a first British Open and fifth career Major title by the time he signed his card. In the end, he had three shots to spare over runner-up Henrik Stenson while Westwood’s finishing 75 saw him drop down to tied-third.

“I just thought I need to bring my A-Game, to show up and play some of my best golf. and I did. I played some of the best golf of my career. It feels amazing to have this championship,” said Mickelson of getting his hands on the Claret Jug to go with his Masters and US PGA successes.

Q
Is there any way Jon Rahm could have avoided that two-stroke penalty he received for moving the ball at the 16th hole at the Memorial?

A
The simple answer is yes, but only if he had noticed that the ball had moved. In such a situation, Rahm could have replaced the ball to its original position without any penalty. However, the Spaniard didn’t notice that the ball moved as he prepared to play his chip shot from greenside rough and the movement was only obvious via the television cameras. As PGA Tour official Slugger White put it: “The Rule is 9.4. It was a ball at rest by the player, moved, and since he didn’t put it back, he was assessed a general penalty, which is two strokes . . . when he put the club down behind the ball, it moved ever so slightly to the left, so it changed positions.”