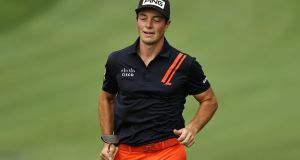 Viktor Hovland walks on the 18th hole during the final round of the Travelers Championship at TPC River Highlands in Cromwell, Connecticut. Photograph: Elsa/Getty Images

Viktor Hovland, on an upward trajectory in the world golf rankings having broken into the top-50 for the first time this week, is sticking to terra firma – quite literally!

Rather than avail of chartered flights in travelling from one tour stop to the next, the 22-year-old Norwegian has decided to make each trip by road in his Lexus SUV with the Covid-19 pandemic a consideration in his decision-making.

In the case of getting from Cromwell in Connecticut to Detroit for this week’s Rocket Mortgage Classic, that journey necessitated an 11-hour road trip of some 700 miles for the fourth tour venue in four weeks: so far, his car has taken him from Texas to South Carolina to Connecticut and on to Michigan.

At least it is one way of keeping his social distancing while travelling, for this week’s tournament has seen further player defections due to positive test results. Harris English was forced to withdraw on Monday, while Chad Campbell, who was first reserve, went into the mandatory two weeks of isolation after testing positive on Tuesday. Earlier in the week, South Africa’s Dylan Frittelli tested positive prior to taking the PGA Tour charted plane.

Campbell tested positive during the pre-tournament screening and described the result as “unnerving” but added: “I am incredibly grateful to be asymptomatic and feel physically well . . . [I] will be quarantining myself to protect others until I am well. I am looking forward to competing again once it is deemed safe for me to make my return.”

The number of positive cases on the PGA Tour has risen to seven in the past two weeks, while other players – Webb Simpson, Brooks Koepka and Graeme McDowell – withdrew from last week’s Travelers Championship having been in close contact with positive cases. Simpson, though, has been cleared to return to tournament play in Detroit.

The PGA Tour is to the fore in professional sport’s return in the United States and, although it has introduced stricter protocols in learning each week, there does appear to be an acceptance that positive cases are inevitable as the circuit moves from one state to another and it is a matter of keeping the show on the road while limiting possible cases.

“I think that just reminds us of how easily this spreads, that we need to take precautions,” said Hovland. “But I feel like we’re still doing a very good job of that, especially being out on the golf course, you are at a safe distance between each other in my opinion. As long as you don’t venture out too much at night or you kind of stick to taking takeout and going back to your room, I think it’s not that big of a deal.”

For Hovland, up to 45th in the world, the decision to drive rather than fly from venue to venue, made more sense from a convenience point of view. “I was thinking during this whole pandemic thing as well, having to get on the charters at specific times, even though I have to get in the car and drive 15 hours, it’s still a lot more convenient because I can go whenever I want to go and I can also pack more stuff in the car. It’s just like a little bit more freedom in that way,” he added.

The Rocket Mortgage Classic is the fourth tournament of the PGA Tour’s restart and will again be played behind-closed-doors with no spectators.

Séamus Power, who missed the cut in each of his last two starts on the Korn Ferry Tour, has returned to the PGA Tour and is the only Irish player in the field. The Waterford golfer is grouped with Australian Cameron Percy and South Africa’s Erik Van Rooyen in the first round (with a 5.20pm Irish time start).