Cannon fires on all cylinders to take Irish Amateur Close 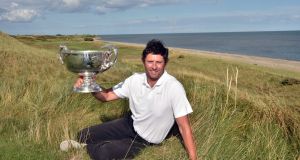 Robbie Cannon: “I even wrote down in my diary last night that I was going to win, I just had a really good feeling”

After coming back from two down with five to play to beat Castle’s Alex Gleeson by two holes in the semi-finals, the 39-year old former South of Ireland and Irish Amateur Open champion produced a stellar performance against the 21-year-old Wentworth and Killiney man in the decider to leave himself half way to a career Grand Slam.

“Very, very happy,” a delighted Cannon said after his win over Leonard, who beat Portmarnock’s Conor Purcell 2&1 to reach the final. “I even wrote down in my diary last night that I was going to win, I just had a really good feeling.”

He added: “Two good friends of mine, a former coach Seamus Duffy and Matt McAlpin, they call it the Cannon Slam. I’m half way to winning all six. It’s definitely a realistic ambition now.

“Before today it was probably slim, but I think I’m there with a fighting chance now. I think that’s something for me to aim for, for the rest of my career.”

The key for Cannon wasn’t just his putting in the final – vastly improved by Balbriggan professional Nigel Howley – but the bunker shot he holed at the 14th to start an incredible comeback against Gleeson.

“I was two down with five to play, and looking like I was going to go three down only I holed a bunker shot for a half,” he said of his second attempt to escape the sand there. “When I holed that I knew the title was going to be mine. I felt like it was destiny.”

Cannon hit two stellar four irons at the 15th and 18th, but it wasn’t just his ball striking but his clutch putting that made the difference against Leonard.

He birdied the seventh from 15 feet, and pared the 10th to go two up, lost the 11th but won the 14th before claiming the 15th in par to go three up with three to play.

Leonard won 16 with bogey, but Cannon made no mistake at the next, two-putting for a 2&1 win after Leonard had failed to hole a 30-footer for birdie.

His dream is to tee it up for Ireland again after being snubbed in 2013 when he won the Irish Amateur Open. “That was probably the hardest pill I’ve ever had to swallow. It would mean the world to play for Ireland again.”

Leonard now heads for the US Amateur in Pebble Beach with his morale high after a great week. “He holed the putts, which was the key thing,” said the Yale student, who was left to rue missing the 14th green. “Fair play to him. It was a very good week. I came here to enjoy the course and see how far I could get. It’s been a great experience.”