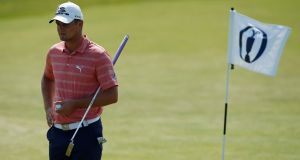 Bryson DeChambeau during a practice round at Royal Birkdale before the Open Championship. Photo: Paul Childs/Reuters

Bryson DeChambeau got down to putting practice on the green beside the art deco clubhouse on Tuesday evening with a spirit level, a metre-long steel ruler, a marker pen and a longish putter that has a grip the size of a small-pickaxe handle.

DeChambeau, the man with a major in physics and a Ben Hogan-style cap, has earned a name for himself by daring to be different as he brings a scientific approach to what is essentially a touch game. The shafts on all his irons measure 37.5in, about the length of a standard seven iron, and all the club-heads weigh 278 grammes, which he feels can produce a more consistent swing and improve ball contact.

The 23-year-old Californian who lives in Dallas was the last man into the Open by virtue of winning the John Deere Classic in Illinois on Sunday with six birdies on the back nine and by the time he got to the Southport house where he is billeted for the week it was 10am on Monday, he had had about an hour’s sleep and moved up 80 places to No34 in the world.

DeChambeau is entitled to feel fully vindicated as he prepares for his first major as a professional having turned down places at last year’s US Open and Open in order to turn pro after winning the low amateur at the 2016 Masters, though the tools of his trade and his approach to it remain a bone of contention with some and the source of intrigue to many.

Practice on day two consisted of 14 holes in the company of Jason Day among others and while some of his play was scrappy as he fought jetlag and adjusted to the change from the benign conditions in Illinois to the nuances of a breezy Birkdale, he was gracious in acknowledging the spectators and accepting their good wishes.

During a hold-up in play waiting for the par-three 4th green, Day, the 2015 US PGA champion, was the first to take a peak into DeChambeau’s bag where the putter sits alongside the driver, and the Australian got the full run-through and a demonstration of his sideways-on method which he has been forced to shelve for the time being.

The Australian is not the only big name to be fascinated, and DeChambeau finds the attention flattering. “They all seem to be interested with what I am doing and have a look and ask me about it, but they don’t want to go the whole way and embrace it. I guess they won’t realise it’s better,” he said. “I’ll keep on doing what I’m doing. I do it my way and I feel comfortable doing it my way. And I won at the weekend.”

The essence of his style on the tees and fairways is to take shorter, straighter swings with his forearms in line with the shaft and from a more upright stance than the norm, the aim being to set up and swing on a single plane. If that sounds complicated, the putting remains a work in progress and currently he is taking an upright stance with the shaft aligned to the inside of his left arm.

The USGA has ruled one of his side-on putters non-conforming, however, as it considers it to be an alignment tool and the R&A, its European equivalent, is aware of the situation and keen to help. “We have our equipment-standards people here who are happy to sit down with him and make sure that there is no problem,” the chief executive, Martin Slumbers, said. “I hope there’s not going to be because he’s a terrific, young, exciting player.”

DeChambeau, who with his long-time coach developed his first set of single-length irons as a 17-year-old by grinding down a set of shafts, has his supplier, Cobra, working on another putter and will stick to the one that produced his birdie, birdie finish on Sunday that got him here. “It was too difficult to get the club altered in time so I’ll stick with this for now, but side-on is even better,” he said. His first task is to make the cut, like all 10 of the previous John Deere winners who were the last man into the Open.