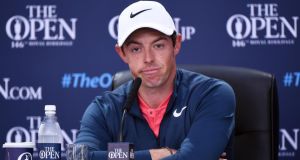 Rory McIlroy is hopeful of turning his fortunes around at Royal Birkdale this week. Photograph: Gerry Penny/EPA

Rory McIlroy’s current form is an enigma, with nobody - not even the player himself - sure of what will unfold over 18 holes with a scorecard in his hands.

But the 28-year-old Northern Irishman, who has missed three of his last four cuts, including the US Open, believes the bookmaker odds of 20/1 on him at the 146th Open championship are tempting:

Whatever said about McIlroy - a perennial favourite in recent years - drifting in the market, his missed cut at the Scottish Open last week at least enabled him to get to Birkdale earlier than planned and he has made good use of that preparation time. “I’ve done some good work over the past few days . I’d definitely rate it among the top three in the Open rotation, if not the best course . . . . it tests all aspects of your game. You have to drive it well. You have to be smart. Everything sort of challenges every aspect of your game.”

The major issue with McIlroy’s game this season has been his putting, and he is remaining true to the one that was in his bag at the Irish Open and the Scottish Open - despite missing the cut in both of those events. “I’m happy with what I have in the bag. At the end of the day the putter is only two percent of what it is; 98 percent is the guy that’s holding it.”

Although driving is one part of his game which hasn’t deserted him during his recent slump, McIlroy - claiming to be generally unaffected by that lingering rib injury which disrupted his season - intends using a new 1-iron on many driving holes, as the key is to keep the ball in play off the tee.

“Because I haven’t played that much, the only thing I can really do is take some sort of confidence from what I’m seeing in practice, and sometimes that doesn’t quite translate to what happens on the course. And that’s sort of been the case for the last few months. But obviously it’s been hard to get any sort of momentum with an injury and not being able to practice as much as you’d like.

“But I’m in good spirits. I feel like it’s all coming together. I’m just waiting for that round or that moment or that week where it sort of clicks and I’ll be off and running. I’ve had little periods like this before in my career, and I’ve been able to bounce back from them. I’d say I was in worse positions than this. I feel like my game, the pieces are all there; it’s just about trying to fit them together.”

Maybe time to solve that enigma?