Augusta National is everything you imagine it to be. . .and more

I can’t wait to get out and play in the tournament. I’m happy with my preparations. 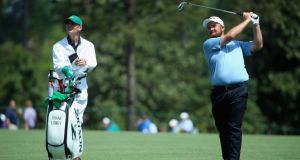 Shane Lowry hits an approach shot as his caddie looks on during a practice round prior to the start of the 2015 Masters Tournament at Augusta National. Photo: Andrew Redington/Getty Images

I’m not quite pinching myself. I know everything is real. Being at the Masters is unreal, weird, but in the nicest of ways.

The other day I was with Pádraig Harrington at the short game area here at Augusta National and we were doing bunker shots and next thing Tiger Woods comes over. He is talking to Paddy and he is watching me hitting bunker shots and I’m thinking, ‘This is all a bit weird’.

Tiger Woods was always my hero when I was growing up. I even sat down the other night to watch a replay of his 2005 Masters win, the one where he holed out the chip shot on the 16th. Chris DiMarco was definitely robbed of that green jacket!

In my eyes, Tiger is a god. I still get a weird feeling any time I see him on the driving range or the putting green. And the fact that I am here on my own merit and getting ready to play in the Masters is just so exciting for me and for my family and friends.

Thankfully, I am good at just going with the flow, at not letting things get the better of me.

I love big occasions and, in golf, they don’t get much better than this week. I don’t think I will let it get the better of me because I will just be trying to compete, as I always do whenever I am playing in a tournament.

I feel my preparations have been good, and I am ready to go. The plan to take a week off and stay and practice in Lake Nona last week worked brilliantly.

I took Monday and Tuesday off from practising, although my fitness coach Robbie Cannon had sent me some workouts to do which meant I didn’t get off entirely. My coach Neil Manchip arrived on Thursday – my birthday – and we got in some really good work in the few days before coming to Augusta.

On arrival at Daniel Field in Augusta, we got a taxi to the rented house which is our home for the week and, after straightening ourselves out, a courtesy car picked us up to take us to the golf club.

I actually find it hard to put into words how I felt. I had a lump in my throat driving up Washington Road before we even turned right into Magnolia Lane. It is the most famous drive you can take in golf. The only other time I ever got similar butterflies is when I am travelling to play the Old Course at St Andrews, doing that drive from Edinburgh when you get past Cupar and then a few miles on you see the old town and the Old Course Hotel in the distance. It’s amazing.

And playing the 18th on the Old Course is probably the weirdest feeling I have had on a golf course. I imagine any golfer paying a green fee there, never mind playing in a tournament or The Open championship, gets that same feeling.

I met up with Paul McGinley in Orlando last week when he was doing some work with The Golf Channel. He came over to the house we were in and he was saying the first time he was here he went straight over to the 10th tee because he wanted to get down to Amen Corner and that’s exactly what I did when I first got here on Sunday. But it was quiet, only members out playing.

On Monday, it was so different at the course. Not quiet at all. It was ridiculous. There were so many people around and it has been like that every day. We’re in a house this week – eight of us, my dad Brendan, brother Alan, Wendy, coach Neil Manchip, and friends Alan Clancy, Brian Moran and Dara Lernihan – and we’ve a chef in for the week.

Augusta is the most amazing place I have ever been and it is great to have so many people who are so close to me here. I am definitely going to try to get my mum to come next year. She’d love it.

I probably could have known from before I came here where you don’t want to hit it on this golf course. You don’t want to leave yourself short-sided. It’s the usual old cliché but even more so here because the greens are so fast and slopey. You try to leave yourself on the low point of the green most of the time and work your way from there and try and pick your birdies off on the likes of the eighth and the 13th and the 15th.

By the time I get to the first tee for today’s first round, I’ll be ready. I’ve done my preparations. I had great craic playing the Par 3 with my dad on the bag yesterday. I am ready, fresh mentally and physically. I’d like to be playing a bit better but it can click. It’s not like I am playing badly. I have got my chipping back to where it is, feeling comfortable with my putter, I’m driving the ball quite well.

Augusta National is everything you imagine it to be . . . . and more. You can see how knowing the course and knowing the greens is a big advantage. There might me a time or two where I hit it in the wrong place and think, ‘what are you doing there?’ but you take your medicine. It’s almost like a boxing match. You take your punches and hit back when you get the chance.