Out of Bounds: Not much to shout about for the Irish, so far 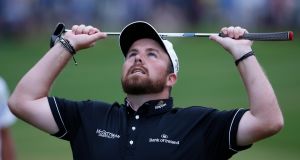 Ireland’s Shane Lowry looks dejected at the end of his final round of the BMW PGA Championship at Wentworth. Photo: Paul Childs/Reuters

I suppose we can’t expect to sit down to a feast all of the time, although, so far, this season’s pickings for Irish players with full tour cards have been akin to attending a picnic rather than any banquet.

Given that the wraparound seasons on both the PGA Tour and the European Tour started at the tailend of 2016, it means we’re just over halfway through the regular seasons – and, indeed, more advanced on the US circuit due to its earlier start – and still without any Irish winner on either side of the pond.

For sure, we can make excuses, even legitimate ones especially with the injuries that have befallen Rory McIlroy and Pádraig Harrington.

Also, the fact, plain and simple, that the Irish on tour contingent has dwindled: on the PGA Tour there are effectively five – McIlroy, Harrington, Shane Lowry, Graeme McDowell and Séamus Power – whilst, on the European side of the Atlantic, Paul Dunne has essentially been the lone standard bearer for much of the season.

From now on, certainly once the French Open later this month kicks off the meat of the European Tour’s summer schedule, Dunne at least will have Messrs McIlroy, Lowry, G-Mac and Harrington for company too. Of course, Dunne has also earned a spot in next week’s US Open field at Erin Hills, so he is getting a taste of golf stateside again having developed his game in his time studying at the University of Alabama-Birmingham.

And although both McIlroy and Harrington have suffered different injuries which led to enforced absences, the lack of any tournament win doesn’t paint a pretty picture.

McIlroy’s season to date has a best-finish of second (when injured) in the South African Open and, stateside, a tied-fourth finish at the Arnold Palmer Invitational. The only other Irish player who got close to winning was Dunne, beaten in a play-off at the Trophee Hassan in Morocco. Lowry’s best finish was tied-sixth at the BMW PGA Championship; McDowell’s a tie for 14th at the Honda Classic and the Valspar Championship; Harrington’s a tied-31st at The Memorial (before his latest, rather freakish injury), and Power’s best is a tied-21st at the Career Builder championship.

Still and all, it has been a disappointing, winless season so far for the Irish on tour.

What was it Pep Guardiola said? “In football, the worst things are excuses. Excuses mean you cannot grow or move on.” So, we won’t make excuses. Let’s move on. And there are reasons to be optimistic going into the second part of the season.

One: McIlroy – fit again, fingers crossed – is only getting going.

Two: Lowry – after a disrupted scheduled, but with a busy itinerary ahead – is finding some form after good finishes at Wentworth and at Memorial last week.

Three: Dunne – on an upward graph with his tour card secured and only focused on a win – is ready to kick on.

Four: G-Mac gets inspired by the US Open. It could yet provide the catalyst for the rest of the year.

So, taking the glass half full approach, reasons to be cheerful. No excuses.

Former Barcelona president Bartomeu arrested after club offices raided 12:41
Echoes of Berlin 1936 . . . Should Beijing Winter Olympics be boycotted? 10:01
The Offload: Ireland women must be allowed to move with the times 10:00
Tiger Woods touched by red and black tribute by fellow players 08:52
England prop receives death threats for not clapping Wales off the pitch 08:29
Here is your handy guide to sport on television this week