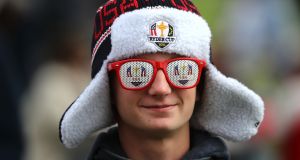 The leading pair of Dustin Johnson and Kevin Chappell finished their third round of the PGA Tour Championship at East Lake last Saturday at exactly 3.21pm, the sort of time the final grouping might ordinarily have been teeing off.

Play had been brought forward by several hours because NBC wanted to show the hardly box office college football game between Notre Dame and Duke University live and that was slated to start at half past three.

As an illustration of golf’s diminished place in the American sporting calendar come autumn, this example was telling.

“How many viewers do you think will be watching us this weekend?” asked William McGirt, a pro who grew up in gridiron obsessed South Carolina. “We’re never going to compete with college football.”

When Rory Mcllroy and Ryan Moore (and Chappell, briefly) went toe to toe in their four-hole play-off the following afternoon, the tour got a dramatic, gripping denouement to the FedEx Cup.

However, even the sight of one of the world’s best trying to land an $11.5m cheque in a sudden death showdown wasn’t enough to lure in casual viewers.

Mcllroy’s thrilling triumph garnered a paltry television rating of 1.9 while over on CBS, the Philadelphia Eagles’ defeat of the Pittsburgh Steelers was hitting close to 14. Little wonder a headline last week screeched, “The PGA Tour has a serious football problem”.

All of the above explains why the Ryder Cup will, as usual, struggle to capture the imagination of American audiences this weekend.

Europe’s blow-out victory at Gleneagles two years ago drew just 1.5, and even allowing for the time difference and the one-sided nature of the contest, this was the smallest viewership since 1991.

Aside from a trend-defying upward tick at Medinah in 2012, the ratings have been on a steady downward slide for years. In these parts, in stark contrast to the other side of the pond, this is an event that scarcely registers beyond aficionados.

Twice in the past 16 years, the tournament has transcended its miniscule but devoted fan base here and broken in to the mainstream coverage.

The first occasion was after September 11th, 2001 when the golf world briefly tried to figure out whether to go ahead with that year’s edition. The second was when The Dubliner magazine published those scantily clad photographs purporting to be Tiger Woods’ then wife Elin. Except for those wildly divergent and unique circumstances, it’s largely a case of “Ryder what?”

In Europe, there is a lazy tendency to imagine the growing American disinterest as a consequence of the county’s waning fortunes, one win in seven editions driving the jingoistic away because they just can’t stand losing.

There might be something in that theory too only for the fact that when Paul Azinger led his team to victory at Valhalla in 2008, most people around here didn’t even notice.

See, it’s nothing emotional, just a product of the traditional calendar and a case of seasonal sporting priorities.

Remember, 2014 was the first time that much of Friday and Saturday’s matches were shown live in America. Again, there had been no great outcry in previous years about the lack of availability. Too few cared too little for that.

No matter what transpires at Hazeltine over the next three days then, the Ryder Cup will, depending on the region, be at least the fourth or fifth item on sports news bulletins.

It will come somewhere after the NFL, college football, baseball, and maybe, in some locales, pre-season ice hockey or Nascar. Nobody will complain about the placement either because, for most, the time for keeping track of golf passed long before the temperatures started to drop.

The vast majority of fans tune in for the Masters in April, keep an eye on events leading up to the US and British Opens, and then turn away immediately after the USPGA in August. That’s the place it has always occupied in their lives.

The notion of watching a tournament in September or October is alien to them. This was why, a decade ago, the Fed-Ex Cup was invented, a bold and creative attempt to concoct play-offs that might breathe life into the end of the golfing year.

The size of the cheque awarded the winner has mostly been in inverse proportion to the size of the audience it has managed to attract.

As compelling a spectacle as Rory provided last Sunday, the talk now is of how to shoehorn a truncated version of the FedEx Cup into August so the season can formally end on Labor Day, the first weekend of September, by which time most viewers have already switched over to their other sporting passions anyway.

Significantly, that debate hasn’t broadened out to include the rescheduling of the Ryder Cup yet, and, for now, NBC are banking on technical innovations like split screen coverage during ad breaks to maybe bring in some extra eyeballs this weekend. Some hope.

“In Tuscaloosa, Alabama, or Green Bay, Wisconsin, they probably don’t know the difference between the Ryder Cup and the Lipton’s Cup-O’-Soup,” wrote veteran American sportswriter Art Spander two years ago. “And they don’t care.”

During a segment remembering Arnold Palmer on New York sports talk radio last Monday, the host touched upon the icon’s impressive record in the Ryders Cup (sic). Slip of the tongue or indication of local indifference to the clash of the continents? You decide.