The Masters aside, this is a city of meth labs and pawn shops, strip joints and gang culture 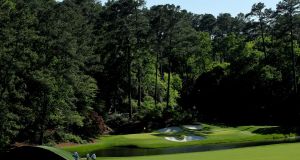 Augusta National Golf Club is spoken about in hushed tones but the vast majority of the city’s residents could not care less about blushing azaleas or stately loblolly pines. Photograph: Jamie Squire/Getty Images

The two-minute video begins with footage of a pair of teenage girls squaring off, trash-talking, apparently, about a boy, and then fighting. There is hair-pulling and flailing punches are thrown. Then, others get involved. A few lads menacingly wielding baseball bats start a running altercation with the driver of a car who soon tries to run them over. The camerawork becomes jerkier after that as the situation escalates. Following a sustained outburst of high-pitched squealing, a woman’s voice can be heard shrieking for an ambulance to be called.

On a sunny Friday afternoon in Augusta last month, this street brawl that, at one point, included at least 50 participants, culminated in the stabbing death of 18-year-old Demajhay Bell. Nine people, including the mothers of two combatants, were arrested on charges related to his murder. It was the ninth homicide in almost as many weeks in Richmond County which contains most of the city of Augusta, and offered one more graphic reminder that the first golf Major of the year occurs in a place far removed from the bucolic idyll we glimpse at The Masters.

The sporting world will tune in for the next four days and marvel at the flora that form such an exquisite backdrop to the drama at Augusta National, oblivious to the fact the vast majority of the city’s residents could not care less about blushing azaleas or stately loblolly pines. Spending small fortunes icing flowers so they bloom just in time for the arrival of the television cameras jars a little when just a Rory Mcllroy drive down the hill from picturesque Magnolia Lane, one in four subsist below the poverty line, and an estimated four out of every 10 kids go to bed hungry.

The juxtaposition of the most exclusive golf club on earth and a struggling southern conurbation nicknamed ‘Disgusta’ once prompted the American commentator Bob Costas to describe it as the equivalent of “the French locating the Eiffel Tower in the middle of a trailer park”. Harsh but kind of fair.

Beyond the sumptuous foliage that inspires so much fawning and overuse of religious terminology (count the number of times you hear “sacred” and “hallowed” uttered in a faux whisper this week), here is a down-at-heel city of meth labs and pawn shops, strip joints and gang culture. The planet’s best golfers and most influential captains of industry rent out the area’s finest houses for up to $25,000 for the tournament. Most Augustans aspire to making that much in a year. To them, the Masters is less a glorious rite of spring and more a wealthy relative dropping in for a week and obscenely throwing his cash around.

Nothing sums up the distance between the natives and the men (and two token women) in the green jackets better than this. Some locals pick up work there for the week that’s in it, filling whatever menial roles are available. Many may do so because, aside from needing the money, they figure to watch some golf once their shift ends. Their first mistake. By order of those in charge, all casual employees must leave the premises the moment their workday is over and must, under no circumstances, ever wander onto the course to see Rory or Jordan. They can’t even look, never mind touch.

Theirs is a different Augusta then, a place more defined by the growing nefarious influence of the Bloods than the historic contribution of Bobby Jones. The Augusta Chronicle even published a map delineating which territory is run by the 12 most prominent gangs in the town. The Hilltop Posse’s stronghold nestles on the southern border with the golf club, the Harrisburg Gang control the area just east of it. That the Harrisburg outfit are also affiliated with the Bloods on a national level, while others swear allegiance to the Crips denotes the magnitude of that particular problem.

“One thing I’ve noticed throughout my career is that gangs and drugs pretty much run hand in hand,” said Lt Jason Vinson who led a year-long investigation that yielded eight gang arrests last month. “It’s a severe problem with drugs in Augusta. We’re constantly identifying and trying to deal with it, and it’s a battle.”

Against that background, it’s hardly surprising that, in recent years, heroin use spiralled, the prescription drug problem reached epidemic levels, and the number of homeless hit record levels. If the grim portrait is of a post-industrial city beset with social problems, some are fighting back. Earlier this year, the Augusta Branch of the National Association for the Advancement of Coloured Peoples organised a city-wide Stop the Violence campaign aimed at trying to curb the use of guns and to turn kids away from gangs.

Augusta has long contended with violent crime. John Rae, a native of Ballynahinch, Co Down who made a fortune trading animal skins and getting slaves to work his land, was convicted of killing a woman named Ann Simpson back in 1771. He was eventually pardoned due to his “unblemished character” and contribution to local politics. Which makes Rae’s Creek, the fabled stretch of water at Augusta National named in his honour, a monument to a murderer, proving yet again The Masters does tradition unlike any other.