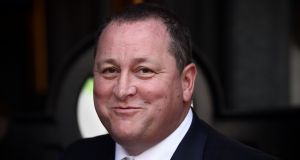 In a crazy nightmare that spun out of control this week, Sports Direct was confused with direct provision. Two systems that barely meet basic needs and... well, that’s where it stopped. It then segued, as dreams do, into an overblown allegorical tale from the bible.

And if you are currently reading the Book of Revelations you’ll note that Sports Direct and its trackie-wearing owner, Mike Ashley, one of the real jewels in the crown of British business, is not mentioned anywhere. From this standpoint, that seems an outrageous oversight.

Ashley is one of those billionaire, CEO, majority shareholding, retail overlords that drinks pints of lager with the boys in the afternoon just to “’ave a larf” and get wasted. But there’s an even more serious side to him.

Towards the end of 2018 he outlined to MPs at Westminster, after they hauled him in to answer parliamentary questions, how he treated some of his workers. Among the many brands Ashley owns are Carlton, Dunlop, Donnay, Lillywhites, Slazenger, Karrimor, Campri, No Fear, Kangol, Firetrap, House of Fraser and Newcastle United Football Club.

Ashley is godly, a High Street prince in brand purchase. Newcastle, though, and a vengeful Toon Army have become like the distressing slave bought by Marcus Aurelius to whisper in his ear at every opportunity “memento homo” – remember you are only a man.

The like-minded Premier League-owning Arab princes and Russian oligarchs with whom Ashley bumps knuckles, they too understand if you save the pennies, the pounds look after themselves. A zero contract mantra.

But the price for warmed seats and the thermally controlled sponsor’s box is that media organisations look through your laundry basket for nasty stains and to see how lordly the overlord is. The answer is how lordly is any lord. Evict the tenant, send up a waif.

As far back as 2013 the serious business pamphlets described Ashley as having a “non-conformative attitude and unorthodox business practices”. It was also reported he had nine in 10 staff employed on zero-hours contracts and the company had been investigated by the British Revenue for paying below the minimum wage.

Both the Guardian and Channel 4’s Dispatches TV programme discovered a number of issues in a company warehouse in Shirebrook, Derbyshire, where about 3,000 people were employed.

Working conditions were compared to a “sweatshop” from the “Victorian era”, with bosses accused of punishing staff if they talked and fining them if they arrived late. A Freedom of Information request by the BBC found that, between January 2013 and December 2014, 76 ambulances or paramedic cars were sent to the postcode for the Sports Direct distribution centre, while one woman gave birth in a toilet on-site.

A zero-hours contract is the one to have if you like diazepam. Each week a lucky dip, the excitement is of never knowing how many hours or what income you can expect. It’s the contract of no choice and disproportionately female and those aged between 16 and 24.

Renaissance man Ashley, typically defying conventional wisdom, saw the zero part as critical, a beautiful contrail to his net worth. He defended their use in front of the parliamentarians, claiming a survey found the vast majority of workers wanted to keep using them. Another survey found fantastic enthusiasm for Sharia law. That’s another story.

Four years ago a report by the UK’s Business, Innovation and Skills select committee said Ashley had used “appalling working practices” and treated his “workers as commodities rather than as human beings”.

In all, it’s safe to say Sports Direct did not have any aspirational poster hanging on the wall over the company coffee-maker in the Derbyshire warehouse. Silly sausage. There was no coffee-maker. Still.

“We are dedicated to ensuring that... the values we live enrich the lives of our members, families and the communities we serve... we reach out to and include all members of our society. We promote individual development and wellbeing and strive to enable all of our members to achieve their full potential in their chosen roles.”

Not a poster, not Derbyshire. Croke Park. Tearjerker all right, it’s part of the GAA’s mission statement printed on its website beneath a picture of members, adults and children, both genders. They hold a flag with words: “Give Respect, Get Respect.”

Maybe Cork GAA could accompany that logo with new sponsors Sports Direct. We know, having read the mission statement, that in the GAA “values are the heart and soul of our association”.

In a partnership worth €400,000 a year up to 2025, there are also bonuses on offer if the Rebels enjoy All-Ireland success in hurling or football. As you recall, the FAI will be repaying Sports Direct €100,000 a month until the autumn of 2025 after the company triggered a call-back option on the €6.5 million it gave the association back in the magical years.

A direct debit from Abbotstown to Páirc Uí Chaoimh could reduce bank charges.

Maybe it is how it looks, that point-of-difference values as expressed by the association are only directed at the parishes and clubs, the vast critical mass of “Gaeldom” , the counties a hard currency part of the enterprise.

And for Cork football and hurling, it’s worth remembering the optics imperative, and not how closely you need to adhere to basic principles and grassroots perceptions but how far you allow yourself to drift. Otherwise it’s back to Revelations and apocalyptic prophecies.