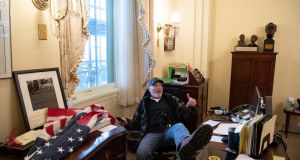 Trump supporter Richard Barnett inside the office of US house speaker Nancy Pelosi after rioters stormed the Capitol in Washington, DC on Wednesday. Photograph: Saul Loeb/AFP via Getty Images

From television reports the US president, watching it unfold from the safety of the White House, seemed as self-satisfied as Richard “Bigo” Barnett from Gravette, Arkansas grinning at the camera from Nancy Pelosi’s swivel chair, his commando boots insolently planted on the house speaker’s desk in Washington’s Capitol Building. Borderline enthusiastic about storming the steps was the Prez. Sources say. Trumptastic.

As Barnett fervently recorded his looting of the speaker’s office in America’s inner sanctum, its pokey, old-fashioned rooms, some still with fireplaces intact, back in Ohio you wondered how Jack Nicklaus was digesting his evening news and if he blushed with the nation. You’d like to think he was fretting over how to put the toothpaste back in the tube.

Like NFL’s Brett Farve, golfer John Daly, basketball’s Denis Rodman, boxer Mike Tyson, MMA’s Dana White and Conor McGregor and a slew of Nascar drivers, Nicklaus became involved in America’s culture war at the wrong time and for the wrong man with the wrong message. Back in the day that kind of decision-making would never have won 18 majors. Nicklaus is in bad need of a Mulligan.

Golf’s actual greatest put out his message about America’s self-proclaimed greatest just days before the November election, replete with the knee-jerk slogan of never wanting a “socialist America”. The retired Golden Bear swallowed the propaganda and declared himself a faithful follower of the Muslim-banning, pandemic-denying and family-separating commander-in-chief.

Parents of 545 children removed from their families at the border as part of the Trump administration’s “zero tolerance” policy could not be found by last October, according to the American Civil Liberties Union (ACLU). Instead of seeing wilful cruelty, Nicklaus, McGregor and Tyson saw a fellow traveller, a partisan.

“It’s about patriotism, policies and the people they impact,” said Nicklaus, not talking about the orphaned kids. “His love for America and its citizens and putting his country first has come through loud and clear. How he has said it has not been important to me. What has been important are his actions . . . I strongly recommend you consider Donald Trump for another four years.”

McGregor wasn’t far off the Nicklaus endorsement. He went less formal with some of our prized sporting cliches.

“Phenomenal President. Quite possibly the USA GOAT [greatest of all time]. Most certainly one of them anyway, as he sits atop the shoulders of many amazing giants that came before him,” said the Whiskey Whisperer.

McGregor has never been slowed by his recklessness with words or mind-warping irrelevance outside fighting and, in another gem from the cage fighter, a nailed-on frontrunner in the race for the most cringe worthy speech of this century, he last March declared that he wanted to “put forth some of my thinking”.

On things pandemic and lockdown, he went on to address “his nation”, as well as President Michael D Higgins, Garda Commissioner Drew Harris, chief medical officer Tony Holohan, Leo Varadkar and “the two Simons”. Had he said “the two Ronnies” it would have at least have had the cover of attempted humour rather than melt-down, batshit weird.

In all, the last day or so in Washington has made US footballer Megan Rapinoe’s profane denunciation “I’m not going to the f***ing White House” sound like lyrical poetry, while on social media there are fresh calls for the PGA’s signature event, the 2022 US PGA Championship, to be removed from the Trump facility in Bedminster. The R&A have already taken his course at Turnberry in Scotland from the British Open rota.

It’s not the first time Bedminster has come up. In 2019, on a racial-slurring sugar high, he tweeted at the progressive Democrat congresswomen, claiming they came “from countries whose governments are a complete and total catastrophe, the worst, most corrupt and inept anywhere in the world (if they even have a functioning government at all), now loudly and viciously telling the people of the United States, the greatest and most powerful Nation on earth, how our government is to be run.

“Why don’t they go back and help fix the totally broken and crime infested places from which they came. Then come back and show us how it is done. These places need your help badly, you can’t leave fast enough. I’m sure that Nancy Pelosi would be very happy to quickly work out free travel arrangements!”

Decorum-loving golf weighed in with less conviction than the Maga stormtrooper marching out of the ravaged building to their Chevy Silverado with Pelosi’s wooden nameplate.

“As an organisation, we are fully committed to Diversity and Inclusion, but we are not a political organisation & simply don’t weigh in on statements made in the political arena,” said the PGA.

Presciently, there was an explanation put out in the Guardian four years ago as to why so many sports celebrities roll in behind characters like the Chosen One, and it’s nothing so prosaic as favourable tax brackets. He’s a vanity magnet for the heaped-up vanities of celeb-dom and the psycho symbiosis that nobody appreciates a delusional celebrity like another delusional celebrity.

Before this, Nicklaus had never been accused of anything worse than poor cardigan choice and certainly not delusion. McGregor has. Daly maybe. Tyson, oh yeah. Rodman frequently. Either way, it all brings us back to the same place. That’s the office. That’s Richard “Bigo” Barnett scrolling through Pelosi’s private emails.