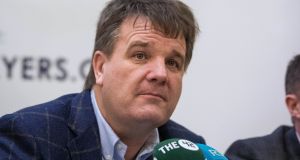 Declan Brennan: the secretary of the Club Players Association at the launch at Ballyboden St Enda’s GAA club in Dublin. Photograph: Ryan Byrne/Inpho

Monday’s much anticipated and well attended media launch of the Club Players Association at the Ballyboden St Enda’s clubhouse in Dublin outlined a clear aim – to “fix the fixtures” chaos in GAA club activity – but detailed strategies have yet to be formulated.

Association chair Micheál Briody said that there had to be “meaningful fixtures” and that they were prepared if necessary to “slaughter a few sacred cows” in pursuit of a “consistent, principled approach” to the problem.

Although there has been no policy document drawn up, CPA secretary Declan Brennan said that in his opinion the All-Ireland inter-county finals had to be brought forward to around the August bank holiday weekend to create adequate space for club fixtures.

He estimated that the association’s proposals could take in the region of 100 days to formulate.

Meetings have already been held with Croke Park and according to Brennan, GAA director general Páraic Duffy had been “very engaging” and, “I think we’re doing him a massive favour putting this in progress”.

He said, however, that he didn’t think Duffy’s proposal to condense the inter-county season “goes far enough” and in what was a fairly clear reference to another aspect of the proposals – which go before next month’s annual congress – the introduction of a round-robin format, Brennan had this to say.

“If it’s not in the interest of the club player or if more games are taking place in the primary end of the season, you know, you can take whatever meaning you like out of that from a personal point of view but the reality is that everything is on the table.”

Brennan said the reason Ballyboden was venue for the launch was “no coincidence,” and recounted that the host club had won the All-Ireland club title last March but had been eliminated from this season’s championship a week after the county had retained the Sam Maguire by defeating Mayo in a replay.

There was a reference to the Dublin situation provided by former All-Ireland winner Kevin Nolan, who said that soundings he had taken in the county indicated “annoyance” and that “fixtures are a massive issue”. He said many players feel that although it is now “a 12-month season,” many are “hanging around for the whole summer for two or three league matches”.

One very specific motion going to congress will be advanced by Wexford and calls for the official recognition of the CPA. Asked what the reaction might be should that be shot down, Brennan replied: “A lot of the guys involved here are winners and we won’t sit down lightly to people saying that we don’t deserve a voice”.

There were mixed signals on the GPA, the inter-county players’ union, who Brennan acknowledged, were among the first to wish the new association well.

Firstly he said he believed that it had been “a disaster for the GAA in general” but that it had also “made the life of an inter-county player a lot easier”. It was now he believed time for the club players to have their problems addressed.

In what was taken as a reference to a clear demarcation between the associations, Brennan added that the CPA was entirely run by volunteers.

“Every single person involved here is doing it on a voluntary basis. There’s no expenses, no money involved and no registration. This is passion and this is looking for change. We have people from different organisations ringing us up and looking to meet for a coffee. Sorry – we have day jobs and we can’t let this take over our lives but the time we do give it will be full of energy and we’re well organised.”

Asked would players have the resolve to attend tedious county board meetings and other committee-room activities, Brennan said guardedly: “We have the energy and we’ll be their voice.”

Former Wexford All-Ireland winning manager Liam Griffin said that the driving force behind the CPA was a “positive discontent” rather than adversarial and that “not one of us wants to denigrate or in any way diminish the inter-county game”.

Aaron Kernan, the former Armagh footballer and Crossmaglen All-Ireland club winner, said that his county had provided good example. “The season ran with not one game called off and included 10 Friday night games, which allow players enjoy their weekend,” he said.

He acknowledged Armagh hadn’t been involved in the latter stages of the All-Ireland championship and didn’t have a major issue with dual players.

Registration with the CPA is free of charge and open to all players. See website www.gaaclubplayers.com.

1 Sligo meeting abandoned after four races due to safety concerns
2 A new putter for Tiger Woods is something worth noting
3 The game they loved so well: How cricket united Hume, McGuinness and McCann
4 Andy Farrell admits Ireland net may need to be spread wide in the autumn
5 Radically shortened intercounty season to be discussed
Real news has value SUBSCRIBE