Second Opinion: Welcome to the GAA’s own FA Cup third round 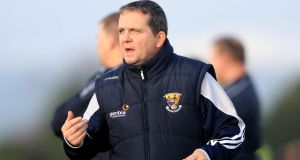 The presence of Davy Fitzgerald on the sideline for Wexford helped bring out a big crowd in Gorey, where UCD were the visitors. Photograph: Donall Farmer/Inpho

It was the weekend when it seemed every sports result came with a caveat. Munster beat Racing Metro in the European Rugby Champions Cup, but how much did the Parisians really care? Plymouth Argyle held the mighty Liverpool to a 0-0 draw at Anfield, but just how mighty could you say Liverpool’s reserves are? And all over the country, GAA teams took their first tentative steps in the 2017 season.

You shouldn’t ever have to second-guess the validity of a sporting event. English football men of the older vintage are no doubt appalled at the laissez-faire attitude many of the top teams now adopt in the FA Cup. The third-round weekend used to be one of the staples of the British sporting year – now it’s a chance for the discerning fan to find out which young star from their club academy they’ll eventually sell to West Brom in two years’ time.

Rugby is now such an attritional sport that maybe it stands to reason that once a team is no longer in the frame to win a tournament, none of that team’s star men should be risked. When the chances of injury are so high, why push them on to the frontline any more than is strictly necessary?

But with Racing Metro last Saturday, the problem went deeper than second-string team selection – it was about basic professionalism and a willingness to compete. When they don’t even manage to scale that low bar, it’s frustrating to watch, even I’m sure for Munster fans who were anxious to measure themselves against the runners-up in Europe last year.

And what were we to make of Wexford running up 5-31 against UCD in the first round of the Walsh Cup under new manager Davy Fitzgerald?

Not very much, if Davy is to be believed. “Look, we’re not stupid. I know UCD were down a lot of guys, but we can only beat what’s put in front of us. All you can do is win your first competitive game, that’s it. We won’t be carried away anyway, that’s for sure. I can feel Wexford are mad to do well, and I want to do as well as I possibly can for them. But I know for sure it will take time.”

He’s absolutely right of course. This game didn’t matter in any real sense whatsoever, particularly when you take into account UCD’s team selection, which apparently included as few as two likely starters in the Fitzgibbon Cup. But we’re far more forgiving of this level of competitiveness in the GAA it appears.

That willingness comes from the fact, of course, that for many counties – for every county, actually, unless you draw more than a couple of games on the way to an All-Ireland final – they play more games that don’t matter, in a literal sense, than games that do in a calendar year.

If every county football team plays three games in a pre-season tournament, and then a minimum of seven league games, that will end up being well over half of your allotted games in a season. It could be over 90 per cent of your games, in fact.

And, as fans, we are far more willing to parse through the fine print of a game to pull out the stuff that we think is important. The result of that Wexford game last Sunday might not have mattered, but 3,000 people showed up to see if there was anything in the tea leaves that suggested a big year ahead.

And there is also the word that Davy Fitz, I’m sure, would ban inside Wexford county lines if he could – ‘hype’. Whole sporting organisations are built on it, but it’s a dirty word in the GAA. Quite frankly, in the absence until May of a competition we’re ascribing any importance to, a little hype is just what the doctor ordered.

After all, the appointment of Davy Fitz was not just a decision based on coaching merit (although it has plenty of that). The hope was that a figure like him had the ability to electrify hurling in the county – that at a basic level it will get people talking and thinking about the hurling team.

What Wexford hurling has had to deal with more often than not over the last 10 years is a crippling sense of ennui. If people are getting a little excited in January, maybe it makes the sacrifices the players are no doubt currently making a little easier for them to accept. If they manage to get a couple of positive results in their first two league games, against Limerick at home and away to Galway, then it will be all the harder to quell the sense of anticipation for the real stuff in the summertime.

For the country’s four rugby provinces, and for supporters of the Premier League, the phoney wars are over this weekend. If GAA fans have a little longer to wait, then a little bit of wishful thinking over these pre-season skirmishes won’t harm anyone.