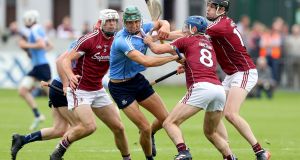 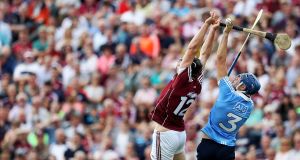 On a better weekend for favourites, frissons were in short supply in Tullamore. League holders Galway stamped their authority on the Leinster quarter-final to sequentially subdue, lead and run away from a struggling Dublin, whose already wavering cause wasn’t helped by a 41st minute second-yellow dismissal for corner back Cian O’Callaghan, which looked a bit harsh.

With Galway already having stretched into a six-point lead the sending-off put the tin hat on the match as a contest.

The winners’ goals were well timed. Jason Flynn’s in the 28th minute was a little fortunate in that it came off a rebound after Conor Dooley’s smart save – one of two he made – from Joseph Cooney but it created distance between the sides at 1-9 to 0-7 whereas Conor Cooney’s pick from a ruck at the start of the final quarter put him in space and the clinical finish turned a seven-point lead into double digits for the first time.

Dublin had led for a couple of minutes at the start but thereafter the match narrative moved along predictable lines, as Galway made sure not to stage one of their “enigmatic” displays of inconsistency and kicked on from the successful spring campaign to qualify for a semi-final against Offaly, which will be played on 18th June in Portlaoise.

The match promised better in the early stages. Dublin were whole-hearted, their half backs combative – captain, Liam Rushe playing a loose, sweeping role – and competitive with the attack giving their opponents occasional moments of anxiety; it took two smart hooks by Adrian Tuohy to defuse a couple of threatening runs by Eamon Dillon – forcing a mishit wide and also a 65.

But they were just that little bit imprecise and prone to hasty decision making. Ben Quinn took a pass from Ryan O’Dwyer in the 12th minute but in his enthusiasm to stick the ball in the net, took too many steps and the moment passed.

In the early phases Galway weren’t in the form that blitzed Tipperary in the league final and their play lacked the devastating precision in passing and shooting. After a disappointing challenge match defeat by Clare they looked a bit tentative – “rusty” as manager Micheál Donoghue accepted afterwards – but eventually they picked up momentum and got their motor running again. Their forwards were all on the score-board by the 26th minute.

Without threatening the spectacle of Thurles a week previously the match got into full swing with nine points in as many minutes up to the 21st.

In the 28th minute Joe Canning – who mixed some sloppy wides with a few sublime points – drilled over a perfect ball to Flynn, putting another goal on a plate for him but the latter turned it into a point.

They also had good performances in defence, Aidan Harte especially good in the air when the match was most competitive and still alert and making interceptions as it wended its way towards a foregone conclusion. On the other wing Pádraig Mannion was also sharp and Dublin made little impact in the half forwards.

It was a feature of some of Dublin’s league matches that they challenged up until half-time before falling away and to give them credit they responded well before the break. Eoghan O’Donnell took a spectacular catch in injury-time to set up the passage of play that led to the goal.

A lack of urgency by Galway saw the ball fall harmlessly to Rushe who drove it to debutant Seán Moran. He could have been going for a point but the strike dropped invitingly for Donal Burke on the end-line and his smart transfer set up Ben Quinn for a slick finish that left just a score in it at half-time, 1-10 to 1-7.

Within five minutes of the restart Conor Whelan, who emulated his league final total of five from play, Joe Canning – finding space as Rushe dropped back – and Conor Cooney flashed over points to rub out the goal.

There followed O’Callaghan’s red card, as he was judged to have tripped Cooney as he emerged from the ruck. His manager Ger Cunningham lamented it as a turning point and “very harsh” and also questioned the first although he was on less solid ground there, as the defender had pushed Flynn over after his goal.

The sending-off maybe dictated what sort of a defeat it would be and as Galway slipped into overdrive, Cooney got his goal and the points flowed. Dublin never surrendered and got some scores off the bench from Rian McBride, Fergal Whitely and in an impressive cameo, John Hetherton.

Galway though were scoring for fun and having overcome this first hurdle look on course for a Leinster final, which many believe will dictate their prospects going into the autumn. So far so good.