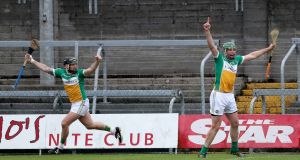 A personal haul of 3-8 from Shane Dooley and good use of the bench by manager Kevin Ryan were keyas Offaly’s senior hurlers avenged last year’s shock defeat at the hands of Westmeath in a pulsating Leinster quarter-final in Mullingar on Saturday.

The home team looked on course to repeat their 2016 heroics for long stretches of the game and they were full value for their interval lead of five points (0-12 to 1-4), the only goal coming from a Dooley penalty in the seventh minute, after he had been fouled by Westmeath goalkeeper Paddy Maloney. Michael Ryan’s men played some fine hurling all over the pitch with full back Tommy Doyle further enhancing his growing reputation at full back, and the visitors struggling to score from open play.

Both of Offaly’s half-time subs, Joe Bergin and Paddy Murphy, played influential roles in what was a rousing second half. However, it wasn’t until seven minutes from the end of normal time that Offaly went ahead courtesy of a great individual goal from Emmet Nolan.

Dooley’s second goal put his side into what looked like a secure five-point lead, but two successful placed balls by Allan Devine and a goal from an acute angle by Killian Doyle levelled the scoring in added-time. However, up popped Dooley to complete his hat-trick by flicking the ball home as Maloney tried to clear his lines. Dooley’s third point from play with time almost up sealed a very hard-earned win.