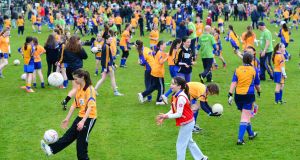 There is now the beginning of a movement to keep players in the game purely because they enjoy the game. Photograph: Eric Luke

‘Joyce Carol Oates,” came the waspish, delighted reply from Gore Vidal in answering his own challenge to name the three saddest words in the English language.

You can’t beat the literary crowd for unfettered bitchiness, but the more civilised and localised plains of Gaelic games has copyright on a few memorable phrases of its own. Chief among these is the timeless, elegiac refrain about the promising player gone to seed: “He was a great minor.”

Contained within the lament is a multitude of implied regrets and memories common to all fallen minor GAA stars: that famous day when he registered 5-11 from play in an U-11 game, subsequent adoration, battles with the high stool, scuffles with selectors, bad ankles, the summer out in Chi-car-go that was the ruination of him, the woman on the scene, the father who pushed him too hard, the college course that didn’t suit him, or the most common and tragic reason of all: “sure he never bothered his hole”.

It doesn’t matter if the great minor in question matured to all but entirely forget his underage football days and happily pursued a rich and fulfilled career and life: the loss of his potential will always be mourned by others more than by himself.

But the cast of great minor players who opted out undoubtedly contributed to the staggering statistic delivered yesterday at the National Games Conference in Croke Park that 58 per cent of all players are “lost” to the games between the ages of 12 and 21.

A low whistle of wonder is probably called for here. Think about this. This is not about the brilliant if erratic football prodigy who discovers doobs and Neil Young at 15, thinks about county trials on a rain-soaked pitch and concludes: “Naaaah” before disappearing into Rust Never Sleeps. No, this is desertion on a mass scale.

He will probably be encumbered by the kind of outdoors gear associated with Alaskan winters and a fluorescent garment of some sort. He enjoys the 15 minutes of silence before the cars pull up and hordes of players tumble from the back seats.

Officially, he has 80 kids at the session but it seems like thousands coming at him all at once, brimming with energy and the kind of soon-to-be-shattered certainty that they are destined to be the next Aidan O’Shea.

All of these coaches are volunteers. Some may be new to the game; others may belong to the ranks of fallen minor stars and others still may have made the grade on the thunderous, dusty afternoons of All-Ireland senior championship football.

But they are all there to help out and will try to ensure that their training sessions adhere to the prevailing GAA philosophy of inclusiveness and making it fun. Many will have come through the more austere decades of GAA underage coaching, when fun had little or nothing to do with it. Take man and ball. Every man in. No prisoners.

Yes, most belonged to that era when they were instructed that every man should “die for the jersey” while still too young to understand that this was a figure of speech: that they weren’t actually expected to sacrifice their young selves in the preliminary round of a community games tournament for a jersey that was clearly ancient and never laundered.

The GAA has long since wised up and responded to the threat/appeal of other sports, that girls are as entitled to play their games as boys and that the best way to keep youngsters interested is to make them feel as if they belong.

And yet six in every 10 players are walking away from the games in the decade between turning 12 and 21. There are probably several reasons for this. Some simply decide to concentrate on whatever other sports they were pursuing as kids. Others exercise their prerogative to reach the conclusion that all sports, including “the Gah”, are rubbish.

But there are many others who will find attaining the bitter knowledge that they aren’t going to be the next O’Shea after all. And they will find this knowledge so painful that they will quit.

It is no coincidence that the big drop-off occurs in the decade when players discover that when it comes to down to it, winning is still at the heart of it in Gaelic games. The nursery school approach of inclusivity and ball skills and praise for everyone is all very well.

But once a generation of kids hits the U-12 bracket, reality hits. The serious business begins. Places on teams are finite. The best excel. Competition is tough. The team from the neighbouring town enjoy beating you by 30 points.

Over the course of a really important address yesterday, Pat Daly, the GAA’s director of games development, acknowledged that the association has to look at the “values” it offers. He was talking about giving kids the chance to keep on playing for the love of it and about the Super Games initiative, which now has 65 centres across the country and is, effectively, an arena for pick-up games where anyone can play Gaelic games, regardless of ability, just for the joy of the playing rather than for any competitive goal.

It is a brilliant initiative. Even the brightest and the best of the GAA’s young players don’t really know what they are doing because they are shuttled along a narrowly defined route once their talent becomes conspicuous. The honour of playing for the county can become all-demanding and overwhelming when added to the universal demands of merely becoming an adult.

Only a few get to experience that. The others might find it easier to walk than to stick around and exist in the margins. And they might shun the idea of Super Games as pathetic and not proper, which is fair enough too.

But at least now there is now the beginning of a movement to keep players in the game purely because they enjoy the game.

They will find their level and it will be a mixed bag, from the player just hoping that the ball goes between the posts for once to, perhaps, the brilliant former minor who decided that, in the end, the serious stuff just wasn’t for him.