Brutish will not to lose knocking stuffing out of entertainment 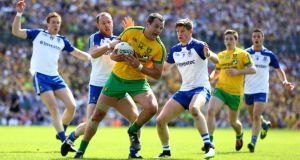 The Ulster SFC final between Monaghan and Donegal this year made for unpleasant viewing. Photograph: Cathal Noonan/Inpho.

We are remorselessly reassured of Gaelic football’s evolution. There’s a presumption of advancement in that. So whatever else modern-day Gaelic football is, it is at least a reminder that advancement and improvement aren’t synonymous. Maybe it’s a summer thing but there have been times during this championship when heading back to water has looked the best option.

Griping is old hat of course. Just as pointing out how God-awful much of the football is automatically invites dismissal as a throwback, some “catch and kick” fossil too inflexible to appreciate the tactical complexities of what’s been put before us for the last three months.

There are also inevitable invitations to ask the thousands upon thousands who happily attended these matches as to whether or not they were passionately caught up in their outcomes. And it’s true that having an emotional stake automatically involves: anyone waiting on the last leg of an each-way double, even a donkey derby in Wagga Wagga, knows what it’s like to be invested.

So sure, an awful lot of people have an awful lot invested in football for an awful lot of different reasons, some of them perhaps due to a stake in maintaining the pretence that some of the turgid rubbish being served up really is as enthralling as its more simpering evolutionary cheerleading might suggest.

That leaves those of us not equipped with overtly sentimental, geographical or financial blinkers condemned to scratch our heads and wonder what we’re missing. And the real answer is not very much, because without such blinkers much of the last three months deserved to be observed through a blindfold.

The drawn Kerry-Cork Munster final was widely acclaimed as the best game of the championship so far. And amidst the systemic splurge, moments of skill and intelligence did escape, but hardly enough to justify some of the more hysterical claims made about it, claims that reveal how much of the championship narrative comes with jargon flimsier than the Emperor’s new clothes.

Sure enough someone actually at that game – and sentimentally invested more than most – revealed to this corner it would be his last ever Munster final because endless trundling hand-passing was not what he’d crossed the county-bounds to watch.

And the problem we agreed isn’t hand-passing. Nor is it how tactics have wormed their way to the forefront. It isn’t even the rampant bullshit swirling around those tactics. Rather it is the mindset behind all of it.

Football evolution hardly crawled out of Mickey Harte’s kitchen at the turn of the millennium. The search for an edge has always preoccupied the brightest minds, whether it was the Down team of the 1960s or Kevin Heffernan’s transforming the Dubs a decade later. That wasn’t so much evolution as revolution, and not everyone liked it.

Back in those sepia-tinged, hopelessly non-glycogenic 1970’s, many were appalled by a wonderfully talented Kerry side’s use of the hand-pass. The game as those people knew it had changed irrevocably and for the worse, they thought.

And it had changed, but transparently for the better, because the aim behind it was positive, using the hand-pass to find space, to move the ball at speed, intelligently using combination play to exploit weaknesses, taking the initiative in order to attack and win. That’s what’s so depressing about football’s supposed modern face: it is so fundamentally rooted in the negative.

The objective is to stop rather than create. Blanket defences, sweepers and the rest of the cod-tactical cant basically consist of getting as many bodies behind the ball as possible and is fundamentally rooted in fear: instead of concentrating on your own abilities, the focus is on the opposition’s and how to negate them.

It’s hardly a coincidence that the most sought-after ability in many set-ups now is a willingness to run and work and “buy-in” to systems which rotate beefed-up athletes around whatever tactical chessboard has been set up by the coaching guru in charge, usually a guy with a penchant for employing phrases like “counter-punching” to justify a lack of belief in his own players’ abilities.

And most of them aren’t good enough. There can after all be only one champion. But that can’t be an excuse for the witless rubbish we’re being subjected to.

Watching the Monaghan-Donegal Ulster final was an exercise in punishment, something irrelevant no doubt to the vast majority of both counties involved, but which is ultimately a oneway ticket to irrelevance since eventually only the most fanatical or deluded will cough up to watch massed ranks of interchangeable “foosball” figures butting off each other like protein-binged rams.

It can’t be coincidence either that cynical and systemic sledging, as well as players throwing themselves down and feigning injury, have become issues of such overwhelming negativity. It really is win-at-all-costs stuff now, with the ultimate cost being entertainment.

The real blood-in-the-stool maddening part though is how it gets presented as being fascinating to the trained-eye. Like it requires taking night-classes to properly critique mind-numbing tedium, or appreciate the subtlety of swarming around a lone attackers like angry bees, or relish the spectacle of ceaseless sideways hand-passing miles.

No one pretends there weren’t crap games in the past, and played at the sort of stately pace that pales next to now too. But at least the objective was winning. Even the most hopeless cause clung to that positive rather than some sub-Catenaccio devotion to not losing. Maybe things will change now the championship is starting for real, although I doubt it. More likely the fear will only increase, leaving many of us to create other summer entertainments, such as counter-punching the telly.

1 Born to ride, born to win: Sam Bennett, the making of a green machine
2 Suarez’ Italian language exam rigged according to prosecutors
3 Awarding of 2023 Rugby World Cup to France part of Laporte investigation
4 West Ham boss David Moyes tests positive for coronavirus ahead of Hull game
5 A kick in the teeth for sports, and a nail in the coffin for communities
Real news has value SUBSCRIBE