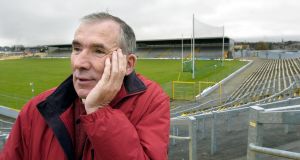 Weeshie Fogarty at Fitzgerald Stadium: his great love of football was evident in his career as a player, a referee and later as a broadcaster. Photograph: Don MacMonagle

For GAA enthusiasts in the afterlife, it has recently become more difficult to get a word in edgeways with the sad departures on successive Sundays of former Louth manager Paddy Clarke and Kerry broadcaster, Weeshie Fogarty.

A week ago in Navan, before the Dunboyne-Kilmacud quarter-final, there was shock at the news of Clarke’s passing and wistfully humorous wondering about where we were meant to go now for Paddy’s inexhaustible supply of statistics, records and rapid-fire conversation concerning football in Louth.

He had a phone at work that he explained would cut off after 15 minutes. The intention may have been – nobody as far as I know asked – to remind Paddy to be brief but every call was prefaced with, ‘now, ya might have to ring me back . . .’

Then, last weekend came the news that Weeshie (‘Aloysius,’ as it took me bizarrely long to work out) had also passed away and this Wednesday, his requiem Mass takes place in St Mary’s Cathedral in Killarney, as he had casually – and eerily to anyone listening back to it on the Newstalk website this week – mentioned in a dazzling scene-set about the town from the Fitzgerald Stadium press box when talking to Off The Ball’s Joe Molloy before the 2015 Munster football final.

By coincidence, on the same day but a couple of hours later, in Dublin’s Glasnevin Cemetery the GAA will mark the 98th anniversary of Bloody Sunday by holding a commemorative ceremony for John William Scott, the oldest of three children killed on the day.

Croke Park flags will fly at half-mast and the names of the 14 people to have died in the atrocity will go up on the stadium screens.

There is a happier thread running through these sad events than is immediately obvious and not just the coincidence that Michael Foley, the Sunday Times journalist, author of The Bloodied Field and advisor to the GAA’s Bloody Sunday Graves Project, was a regular guest on Weeshie Fogarty’s Terrace Talk.

For a long, long time the GAA’s attention to the preservation of its history was negligible. A sustained appeal during Centenary Year in 1984 dislodged documents, medals and fragments of early cine film reels and encouraged the production of local histories.

This was positive but had a similar project been pursued at an earlier stage – maybe 1934’s jubilee year – imagine the wealth of detail that would have survived.

In the meantime there has been great improvement. The GAA Museum in Croke Park celebrated its 20th anniversary this year and the surge of books on the history of the association has transformed what was once a fairly fallow field.

As well as being well-known in other areas, Paddy Clarke and Weeshie Fogarty were at the coalface of that process of remembering the past. Both were involved in coaching – Clarke as one of the pioneers of the Gormanston courses and Fogarty featuring nearly 40 years ago as conducting refereeing modules at Kerry football development weekends.

The latter had a fine playing career, winning a junior All-Ireland and understudying a great Kerry goalkeeper – and Legion clubmate – Johnny Culloty on senior All-Ireland- winning teams and his refereeing career was similarly blighted by timing.

In the early 1980s Kerry were in nearly every final and although he officiated at U-21 All-Ireland final level and senior semi-finals he never got to Croke Park in late September.

But it was as a broadcaster that he was best known.

His programme Terrace Talk – and its associated website – became a treasure trove of interviews with people of historical interest and contemporary figures, whose thoughts will be archive material for future historians.

For instance in 2015 he asks Eamonn Fitzmaurice to explain the approach to the 2014 final when the county completed its latest appropriation of opposition tactics in successful pursuit of All-Irelands and the then Kerry manager intelligently responds.

He wrote three books, on Kerry football, a personal memoir and a biography of Dr Eamonn O’Sullivan, with whom he worked professionally, as his career as a psychiatric nurse overlapped for a few months before O’Sullivan retired as RMS (Resident Medical Superintendent) at St Finan’s Mental Hospital in Killarney, the imposing building behind Fitzgerald Stadium.

His forte though was the first draft of history either through his programme, broadcast match analysis and newspaper columns.

I remember consulting him for a piece I wanted to write on the place of Killarney in Kerry football. He was doing a morning programme the week before the 2002 All-Ireland final and invited me to take part.

Before my first question, as the strains of Matthew and Son were receding, he looked across the desk with that half-amused stare and asked: “Would you listen to much Cat Stevens?”

On the way out, he had set aside for me copies of A Legion of Memories and Dr Crokes: Gaelic Century, the official histories of the two Killarney clubs. He was thoughtful and decent with, as Keith Duggan in these pages put it, “a folkloric genius”.

Also in The Irish Times, he told Malachy Clerkin about advice John B Keane had once given him: “Don’t ever forget,’ he said, ‘that when you’re sitting down above in Croke Park and you’re doing a game, remember that you’re talking to a man sitting up on the side of a mountain in Kerry all on his own. He has his dog at his feet and the fire on and the match is coming from the radio above it. That’s who you’re talking to’.”

There will be for a while a strange silence on that mountain but he’ll also be missed much farther afield.