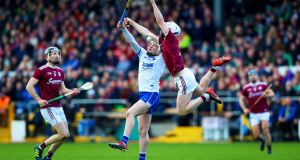 Next Sunday will be a wrap for the current league structure in hurling. It promises to be an interesting match between Limerick and Waterford, whose heroics against Galway last weekend prevented the first re-run in 30 years of an All-Ireland pairing in the following season’s league final.

There will be a significant change to the top division of the competition in 2020. The old hierarchy of Division 1A and 1B has been abandoned and a mixed-ability breakdown has randomly distributed the 12 counties between two new groups, diluting quality at the elite level.

The new format pretty much insulates the top counties from relegation

There was always going to be a consequential loss of competitive tension in the two divisions in any event but further issues have arisen because of the way the cards fell when constituting the new groups. This has caused a good bit of commentary but arguably it isn’t the major problem with the re-organisation.

It had all been equitably planned – first in 1A, second in 1B, third in 1A etc – but because of the capricious nature of the final placings, a rather more formidable bunch emerged as next year’s 1A, compared to 1B.

To refresh, 1A will contain Limerick, Tipperary, Cork, Waterford, Galway and Westmeath whereas 1B has Wexford, Clare, Kilkenny, Dublin, Laois and Carlow.

For some people it looks almost like two hierarchical divisions anyway except that they’re notionally equal and only one county will be relegated at the end of the season.

In order to set up the new structure there was no relegation from this year’s Division 1A but in effect relegation no longer applies to any MacCarthy Cup county.

Westmeath look doomed to bottom spot in 1A and the equivalent in 1B will be between Carlow and Laois – all of whom played in last year’s McDonagh Cup, from which Carlow won promotion in 2018 but are odds-on to return there this summer.

In other words the new format pretty much insulates the top counties from relegation.

To understand why this represents regression in terms of the game’s development, let’s go back to five years ago when the now abandoned format was introduced.

It was as is often the case, conceived in chaos with the three main committees concerned with the game all advancing different proposals. “Not for the first time, the process of determining the best structure for the Allianz Hurling League proved to be difficult and unsatisfactory,” was then director general Páraic Duffy’s observation in his 2014 annual report.

The Central Competitions Control Committee (CCCC), the Hurling Development Committee (HDC) and Management Committee all came up with different ideas before the CCCC proposal, originally advanced in December 2012 was accepted. It was mostly the status quo at the time but with tweaks, such as that there would be no longer a promotion final to get out of 1B – the winners would automatically be promoted.

The obvious opposition to the two six-county divisions was that there are eight or nine top hurling counties but against that, to pull the ladder up behind them would weaken the second division and make development for those teams far harder.

This concept of constant churn with a 1A county going down every year to be replaced by the 1B winners had already produced unexpected results before the restructure with both provincial winners in 2013, Dublin and Limerick, coming from the lower division.

To counter the view that there were too few matches – half the teams had only two home fixtures – a new round of quarter-finals was introduced, pairing the first four in both divisions against each other. There was hue and cry about this because a) it was seen as humiliatingly uncompetitive for some teams and b) the fifth team in 1A didn’t qualify whereas the fourth in 1B did.

Different counties have won the last four All-Irelands, which apart from the revolutionary period of the 1990s hadn’t been done in nearly 40 years

Its twin purpose was to give the lower-ranked teams a crack at the top counties and also, by favouring those who had played three away matches with home advantage, to rebalance the finances.

Yes, it had the weakness that the lower division contained a stark split between the top three and the bottom three but the latter had three matches against notionally better teams and two against peer opponents.

It appeared to work well and the rising standards in 1B yielded three successive league titles from 2015-17 as well as the last two All-Irelands.

There were complaints from 1A teams that the pressure of relegation meant that their match programme was too intense and gave little opportunity to trial new players. Yet there was a lock on relegation in that a team had to finish in the bottom two and then lose a relegation play-off.

And what of the complaints that revenue had been adversely affected by the small number of fixtures? Under the new format, Wexford or Clare or Kilkenny could be left with two home matches against Laois and Carlow, the takings from which won’t strain any coffers.

Finding an ideal format for any hurling competition is difficult because the number of teams in various competitive categories can fluctuate but over the past six seasons the game has enjoyed a greatly enhanced profile. Different counties have won the last four All-Irelands, which apart from the revolutionary period of the 1990s hadn’t been done in nearly 40 years.

Of course there were other influences as well as the structure of the national league but why dismantle something that may well have been helping level the competitive pitch and install a system that unfairly disadvantages developing counties to serve the interests of the strong?