Another All-Ireland final without powerhouses Kilkenny, Cork or Tipperary 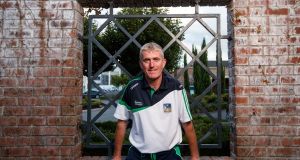 John Kiely: bids to lead Limerick to their first All-Ireland senior hurling title since 1973 when they take on holders Galway at Croke Park on Sunday. Photograph: James Crombie/Inpho

The RTÉ radio documentary, Who Fears to Speak of ’98 got a rerun at the weekend. Originally broadcast in 2008 on the 10th anniversary of the hurling summer in question, it still packs an impact when retelling the many extraordinary events of 20 years ago.

Most people are familiar with the stand-out moments: the Clare controversies, the three priests (Fr Ted, Fr Dougal and Fr Jack, according to high-grade contemporary intelligence), Offaly, Jimmy Cooney – even for someone who watched it all unfold, it seems barely credible.

There is also a less commented-on significance about 1998 and that is that it marked the end of an era, a 19-year spell in which the Big Three of Kilkenny, Cork and Tipperary actually didn’t win a majority of the All-Ireland titles. Stretch a year in either direction and it’s the only 20 years in which the rest of the country broke even.

What would follow was the most concentrated period of success ever known by the three counties, perpetually atop hurling’s roll of honour: 14 straight MacCarthy Cups or put another way, 17 of the next 18.

Now, much of this had its origins in another event that doesn’t make much news when 1998 is discussed. It happened on the evening of 16th November and the successful candidate reacted to his appointment as follows:

“I see it as a real challenge which I’m looking forward to. I’m excited about getting in there and working with the players.”

This earnest and unexceptional sentiment couldn’t have prepared anyone – perhaps even Brian Cody himself – for what the next 20 years would bring.

When we say that the Big Three won 17 of those titles it’s not quite like saying that Henry Shefflin and Bosco have 10 senior All-Ireland medals between them because Cork and Tipperary also won three each, albeit compared to their two-decade averages of 4.6 and 4.1, respectively.

But it was Cody who managed the teams that, after a slow start, would take serial success off the charts.

They appeared during the course of those 11 All-Irelands (to date) to be hungrier, more desperate for success and more resourceful than opponents who hadn’t won a fraction of their titles haul.

Like any prairie fire, it took a while to put out and after Clare had raided the championship in 2013, Kilkenny still flared up again to consume the next two. What’s seldom is wonderful and 2013 was hailed as a classic season: the replayed final between Cork and Clare even made an editorial in the Guardian.

Later that year, on the All Stars trip to Shanghai, Cody was asked was he amused that as soon as Kilkenny failed to reach an All-Ireland semi-final – for the first time in 17 years – the championship became ‘one of the best ever’. His reply was at once measured, tongue-in-cheek and slightly plaintive.

“I’m sure nobody thought it was good because we weren’t in it,” he said. “I’m sure they all missed us badly. I thought the rest of the years were pretty good too.”

Yet the truth is probably that by not being in it, Kilkenny were increasing the chances of the season being so highly regarded, as variety is an important part of sporting allure, something the football championship is finding out – this year, for instance, will be considered more memorable if Dublin are beaten than if they duly complete an historic four-in-a-row.

And hurling especially thrives on such years and eras. It’s hardly surprising in a sport that has been dominated by three counties, winning 72 per cent of the championships.

The era of 20 years ago was memorialised in Denis Walsh’s Hurling: The Revolution Years and maybe a little unnoticed, the game has hit a marker from back then in that Sunday’s Galway-Limerick final becomes the first time in 22 years that none of the Big Three have contested an All-Ireland for two years running.

If this sounds a bit too much like a desperate search for historical meaning, bear in mind that Kilkenny, Cork and Tipperary have been absent from two consecutive All-Ireland finals on just three other occasions in GAA history.

There may be even greater significance about this year’s final. Limerick have waited 45 years since their last Liam MacCarthy Cup win.

Limerick were to an extent onlookers during the events of two decades ago. Tom Ryan brought two teams to All-Ireland finals in the 1990s and both lost in the most regretful of circumstances – to Offaly’s late, lethal barrage in 1994 and despite Wexford being reduced to 14 men for most of the 1996 final.

Ryan is on the record as believing that his team’s contribution to that era wasn’t fully appreciated in the glare of the silverware assembled by Offaly, Clare and Wexford. That Wexford v Limerick final, back in 1996, the last time Kilkenny, Cork and Tipp spent two years on the outside, was also the last time Limerick went to Croke Park believing they could win.

Eleven years on, in 2007, they were surprise finalists but with Kilkenny there to meet them, it’s safe to imagine that not even the greatest – and nowhere are they greater – optimists were expecting a whole lot.

History will be in the air at Croke Park. Galway can put All-Irelands back to back for the first time in 30 years but on this occasion Limerick will arrive daring to believe that from Sunday evening, the heroes of 1973 will longer have to stand sentinel over the county’s hurling tradition.