Yes, the GAA created a monster in Dublin, but did they have any other choice? 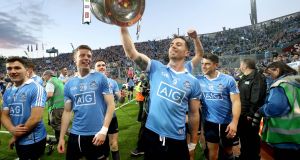 Dublin had always been challenging territory for the GAA and the decision over 15 years to pump sustained funds into the county has been a success. Photograph: Ryan Byrne/Inpho

They might be trivial compared to events on a global scale but the GAA must face up to some ominous signs blowing around its own world. Equality is an ambivalent concept within organised sport, an activity that has always elevated the winner over the loser and within whose context “elite” is not generally considered a pejorative term.

As things stand, however, equality is becoming more and more of a problem for Gaelic games. A good deal of this has made itself prominent early in the year, as the GAA changes its reporting calendar to cater for annual Congress in February rather than April.

Two of the bigger issues to emerge from the last few weeks have been the club fixtures’ crisis and the ongoing balance of funding between Dublin and other counties.

Sifting through the annual report, financial report and motions list for Congress at the end of this month, a sense of unease is unavoidable despite another solid year financially and administratively.

The establishment of the Club Players Association drew further attention to the now chronic inequality between the preponderance of players whose activities keep the games alive in communities up and down the country and the intercounty panels who have become increasingly central to the GAA’s business model.

One of the reasons the round-robin proposal for the All-Ireland quarter-finals has been tabled is the sliding interest in the last eight in recent years and although the continuing box-office strength of the final stages of the championship has kept the revenues buoyant –partly thanks to a proliferation of replays (after 12 years without one, there arrived four in five seasons – it had taken 40 years for the previous four) – the gap between top counties and the chasing pack has been taking its toll.

Of course this disparity is not particularly new but whereas in the past the provincial and All-Ireland championships wended their way through the summer without causing too much intrusion and the gate receipts were modest if much appreciated, in recent years the intercounty competitions have grown in prominence and, above all, in financial value.

It’s just 20 years since the GAA began to add fixtures to the All-Ireland championships. For the last year of the sudden-death format, 1996, gate receipts for the season were £6 million, which adjusted for inflation comes in at about €11.5 million – just over a third of the figures for last year (€30 million).

These increased earnings have been reflected in the greatly enhanced profile of the intercounty championships. Further evidence of this can be seen in the figures that show gate receipts 20 years ago constituted a full 70 per cent of income, whereas the significantly higher receipts for the most recent year made up just 50 per cent.

This tells its own tale of greatly increased commercial and broadcasting activity.

The problem is that the more commercially adroit the association has become, the more its constituent parts and sponsorship, no less than sporting feats, is the preserve of winners.

On his RTÉ radio programme on Tuesday, Seán O’Rourke spoke to GAA broadcaster and journalist Damien Lawlor about the disparity between Dublin, with their sponsorship cache of nearly a million a year, and mid-ranking counties, who might take in €30,000.

Before commercialism entered the world of the GAA, such disparities couldn’t exist, even if different ones did, most obviously population.

Amateurism, then, actually becomes a problem. Why? Because the GAA is not essentially about regulating competing professional “franchises” but rather developing the games. Were it simply a professional sports organisation with a subsidiary development remit, players could go to the highest bidder and would only have to play at intercounty level – at a stroke relieving fixtures’ congestion.

Clearly there’s also a downside. Discarding amateurism could well end up in insufficient revenue to keep the show on the road and there would also be risk in the extent to which the public and more importantly volunteers would lose interest in an activity which had effectively cut the umbilical cord between players and community.

But the downside at present is that the big, traditional counties can deepen the division between themselves and others because of advantages that didn’t seem so pronounced 100 years ago, when even if Dublin had established a firm hold on football with 11 of the first 29 All-Irelands there was still space in their slipstream for other Leinster counties – Wexford, Kildare and Louth – to win titles as well.

These days both GAA director of finance Tom Ryan and Croke Park Stadium director Peter McKenna have both lamented the scorched earth of the Leinster football championship and its impact on revenues.

It is sometimes argued that the GAA have created a monster with the rise of Dublin but what else could they have done?

The biggest population centre in the State had always been challenging territory for the GAA and the decision over 15 years to pump sustained funds into the county has been a success. By taking seriously the need to engage in what had been an inadequately developed region, the GAA has ended up with a county which has improved that engagement to the extent that it has become a dominant competitive presence.

Act in an attempt to level the playing field competitively and there is the danger of undermining the spread of Gaelic games in the capital. Dublin chief executive John Costello argued the point in his annual report.

“Put bluntly, extra funding for other counties should not come at the direct expense of Dublin’s games development initiatives. Bleed that well dry and it won’t be long before soccer and rugby make inroads back into terrain that Dublin GAA has fought, tooth and nail, to colonise in the first place.”

There are no obvious answers, apart from tearing up traditional structures and risking local attachments and loyalties fostered over more than a century.

Put another way, no easy answers.