Seán Moran: A fascinating Limerick lens on the evolution of modern hurling

In a year made for foresight and hindsight, '20/20 Vision' compares present and past 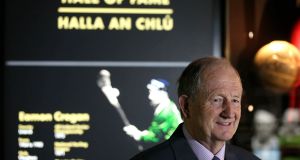 Éamonn Cregan, the Limerick All-Ireland winner and GAA Hall of Famer: ‘The greatness of hurling is its unpredictability.’ Photograph: Cathal Noonan/©INPHO

The start of every new year involves a good share of looking back as well as forward and beyond the simple bewilderment of “where did that one go?”

There is hardly a more up-to-date forum in the GAA than the annual Games Development Conference but last Saturday, Pat Daly in the opening keynote address reflected on the first conference back in 1997 and its simple theme of “Play to Stay”.

This was Daly’s last major involvement in the conference, as he now moves fully into his new role as director of games development and research. He leaves the event as an annual fixture in the calendar that is oversubscribed every year.

His address outlined the rate of change over the past two decades from the reform of the juvenile tournament Féile to the social impact of the women’s games – not forgetting the blossoming international context with the materialisation of fluent-Irish speaking Germans in Daly’s home town of Tallow during last year’s World Games.

How did we get here? The question has been a nagging constant for an organisation whose present attitudes to the future have always owed something to an underexplored past.

A fascinating excursion into this very territory is also one the themes of “20/20 Vision: Hurling and Limerick”, a handsome hardback and the latest work by the indefatigable duo of Ciarán Crowe and Joe Lyons, for nearly quarter of a century the joint editors of The Green and White, the Limerick GAA youth magazine.

They were also the authors of 2018’s At Last – uncontentiously hailed as the definitive account of the county’s first All-Ireland since 1973.

Maybe the original hope or intention was to mark what last year might have been the county’s first back-to-back All-Irelands and call the book Not Again!

Instead the latest publication is split into three sections. Yes there are details of Limerick’s ultimately disappointing season – although the book points out the anomaly of the county coming to such a conclusion despite winning both the league and Munster titles – but also a comprehensive records archive and of particular interest to the general reader, a fascinating comparative study of hurling over the past 40 years.

The accounts of the game back in the early 1980s were gathered at the time by one of Limerick’s great hurling evangelists, Michael O’Grady, who worked with many counties over the years, including a significant contribution to the rise of the game in Dublin this century.

They were never published and O’Grady was happy to make them available to 20/20 Vision in the pages of which they are peer-reviewed by a gallery of distinguished hurling heirs.

One element which stands out is that although the game has radically changed in that time, the insights of progressive coaches and mentors – Fr Tommy Maher, Justin McCarthy, Noel Drumgooole etc – remain largely valid.

Some have been asked to add their contemporary views and there is consensus that the game – assisted by enhanced coaching, tactical appreciation and modern equipment – is probably more skilful if, in the eyes of many, less compelling.

At one point, O’Grady himself muses on that paradox.

“I might not like all the changes but there is no denying that today’s players are much more skilful than players in the past. Hurling is a better game now due to the quality of the coaching. I’m not sure what can be done in the next 40 years to make it even better again. Time will tell.”

It’s not hard to understand his ambivalence. One of the glories of the game was the sheer unpredictable abandon of the striking. Last year TG4 showed the 1996 Leinster final and even as recently as then, defenders were content to seize ball and drive it as far as possible up the field – or else pull on it to much the same effect.

Even Éamonn Cregan, the Limerick All-Ireland winner and GAA Hall of Famer, who was frequently vexed by a perception that he was impatient with players less talented than himself, celebrates in the 1980s that randomness.

“I am a great believer in the maxim that perfect practice makes perfect but that is not to say that I expect every player to be perfect. The greatness of hurling is its unpredictability; players must adapt to a wide variety of situations and act accordingly.”

Sharing a widely-observed point about the evolution of the modern game, Cregan notes in his later consideration, “possession was not a major part of the game in my playing days: in fact, if you held on to the ball you could get killed!”

Considine sees the influence of the “other code”. “There is a greater emphasis on ball recovery (and retention) and players with the ball use their hands more like Gaelic footballers.”

Not all of the reflection is elegiac. Frankie Nolan, a member of Limerick’s 1973 All-Ireland winners, sees some advantages.

20/20 Vision: Hurling and Limerick, by Ciarán Crowe and Joe Lyons, is available for €20 in Limerick bookshops and online at www.omahonys.ie