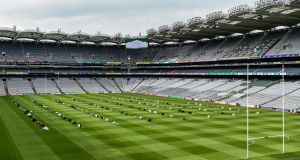 In the absence of GAA games, Croke Park was the venue as 200 people gathered to mark the Muslim festival of Eid Al Adha recently. Photograph: Ray McManus/Sportsfile

The GAA aren’t commenting on the latest knock-back of their plans for increased match attendances but privately believe that it won’t be until the schools are safely back in September that any significant loosening of restrictions will take place.

There is, however, irritation at some levels that the Government announcement on Tuesday – that the standing limit of 200, including teams, officials and volunteers would remain– blindsided them so thoroughly, as there had been firm indications from ministerial sources that the rise to 500, which had been flagged for Phase 4 of the exit from lockdown, would be announced.

“We were surprised and disappointed having hoped to get it up to 500,” said one source, “particularly as our track record over the past three weeks since the clubs came back has been good in terms of compliance and being incident-free.”

Instead, the advice from NPHET [the National Public Health Emergency Team] was to delay Phase 4 for the second time. This despite lobbying from the GAA on the basis that 200 was too low a figure given the size and capacity of many venues.

Minister for Health Stephen Donnelly, speaking on RTÉ Radio 1, however made clear that the stadia weren’t the problem.

“NPHET’s position on this is, they actually don’t see much of an issue during the game. The GAA and various other sporting organisations have some large stadiums. Their view is, of course you can have more than 200 people at an outdoor event properly spaced. Their concern is what happens before the match and after the match.

“For example, some of the clusters we’re looking at, at the moment, the belief is that some of the transmission may have been in the cars, on the way to work on the way from work. The public health experts – their view is the match itself is not a problem. But people congregate beforehand, people share cars, people congregate afterwards and that really is their concern.”

The ongoing restrictions come at a financial cost with inter-county training due to begin in mid-September by which stage most club activity will have been completed. In the absence of more tolerant attendance figures, counties are going to be very short of funds.

There is a further tension in the system with Ulster allowed host bigger crowds in the cross-border counties. Guidelines from the Northern Ireland executive are more flexible, allowing the organising body set its own limits “where the operator can control access and ensure adherence to social distancing”.

Ulster GAA has approached matters more cautiously but even with its self-imposed restriction of 400, is allowing twice as big an attendance as in the Republic.

There is a developing urgency about the matter, as the proposed inter-county season is on the horizon and drawing closer. In the early summer there was a view that, by the time the championship arrived, permitted attendance levels would be going up with stadium director Peter McKenna hopeful that Croke Park could accommodate nearly 30,000 were social distancing to be reduced to one metre.

Instead with just over two months to go to the inter-county championships, the limit is still 200, a figure McKenna described in the Croke Park context as “to all intents and purposes behind closed doors”.

The Irish Times has been told that there is still no appetite for matches being played behind closed doors and that the whole season would have to be reassessed were the current limit to go unrevised into October.

There is still uncertainty about the inter-county season simply because it remains at the mercy of the public health statistics and the climbing rate of Covid-19 cases in the past fortnight casts its own shadow.

Then there is the return of the schools, the outcome of which is by no means guaranteed. Officials hope for the best that the roll-out will be without mishap and reflective of the broad EU experience and that the Government will then be more reassured about aspects of Phase 4.

GAA officials accept that the health advisory is nothing to do with the quality of the association’s facilities but the access and egress protocols governing arrival and departure of spectators at venues.

Addressing this issue raises a previous discussion on the selection of a limited number of venues at which match-day procedures could be planned, practised and perfected with staggered times for the entry and exit of different sections of the ground.

It’s no secret for instance that Leinster Council have looked to concentrate its championship fixtures in four grounds: Croke Park, Nowlan Park (Kilkenny), O’Moore Park (Portlaoise) and Tullamore’s O’Connor Park. The later three provincial venues are all on the outskirts of their towns and don’t have a range of pubs or hotels in close proximity where spectators might gather.

Croke Park does but the hotel opposite the Hogan Stand would need to be addressed were Phase 4 to be green-lighted, as the GAA won’t want any congregating in the vicinity of the ground.

Also under consideration is issuing a request to supporters not to travel to matches in the same vehicle unless the other occupants are family or sharing the same domestic environment.

There is at the top of the association a belief that when other sports begin to stage big events, such as rugby internationals, the cumulative pressure to allow a reasonable crowd to attend will grow whereas at present just GAA club matches and, after its recent resumption, the League of Ireland are in action.

“We don’t want our members becoming too despondent or disheartened,” Mr Horan told GAA.ie. “What’s important is that we have the games back and we keep them back and we continue to be vigilant and show leadership.”

On a related matter, as of last Friday, 20 clubs nationally had been affected by coronavirus scares – through either positive or negative tests – but to date no championship fixture has had to be postponed.