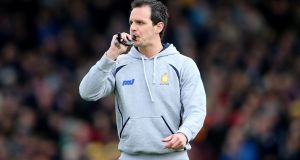 The return this week of Paul Kinnerk to the Clare hurling management is the latest evidence that manager David Fitzgerald is preparing a considerably ramped-up challenge for the year ahead after two very disappointing seasons since the county won the 2013 All-Ireland.

Kinnerk has been involved in many of the county’s recent successes: the minor team that won the Munster title in 2010 and narrowly lost the All-Ireland final to Kilkenny, the under-21 All-Ireland winning teams of 2012 to 2014 and the senior success three years ago.

He departed the team after the 2014 season and had taken a role in his own county Limerick’s underage football and hurling academies as well as with the county’s minor hurlers.

Fitzgerald has been under a certain amount of pressure because of the poor results in 2014 and ’15 – specifically championship defeats by Cork, Wexford and Limerick – even if the county board of which his father Pat is secretary, has remained steadfastly supportive.

If the unsuccessful defence of the All-Ireland in 2014 could be partially attributed to the difficulties for any young team in adjusting to the status of champions, last year was particularly disappointing with relegation in the league followed by defeats against Limerick and Cork – neither of whom went on to have much of an impact in the championship.

There was also a parting of the ways with Podge Collins, who had opted to play football with the county team managed by his father Colm and who, anyway, injured a cruciate and missed most of the year.

Despite the official line that nothing was wrong that he couldn’t put right, Fitzgerald appears to have accepted that he needed to bring more variety to the task in 2016.

Collins has been accepted back into the fold even though he still wishes to maintain a dual career, something with which Fitzgerald has long had issues and not unreasonably given the difficulty involved in trying to combine football and hurling at intercounty level.

The Cratloe player has been missed though. He was one of the major influences on the All-Ireland title win in 2013, ending the season as an All Star and Hurler of the Year contender. His return has been an important part of the Clare manager’s plan to leave nothing to chance this year.

Another unexpected departure saw the involvement of Dónal Óg Cusack as a coach and selector with the team. Well-known as both a hurler, players’ activist and pundit, the former Cork goalkeeper is known for his forthright views and the willingness of Fitzgerald to involve such a strong-minded individual sent out a message that he was willing to work with anyone he believed might benefit the team’s season even if they couldn’t be guaranteed to agree with him all of the time.

During the two poor years since 2013 there has been very little public dissent from the Clare players apart from the criticism of panellist Davy O’Halloran, who left the panel last year accusing the management of victimising certain players.

Fitzgerald is well regarded as a coach by the players, who have clearly been of the view that their manager doesn’t bear exclusive responsibility for what has gone wrong in the past two years.

So far there has been intensified commitment with the familiar Draconian early-morning training sessions – last Friday at 5.0 for instance – and commando-type sessions last month, including (literally) jumping in a lake.

Kinnerk’s return though has been a real coup. Fitzgerald had hoped to persuade him to return and said in his official statement announcing the appointment: “I initially spoke with Paul during last summer, and then several times throughout the winter about getting him involved with Clare for the 2016 season but due to personal commitments he was unable to consider the invitation until very recently.”

There was also bad news for the county with the news that centrefielder and centre back Patrick Donnellan, who captained the team to the All-Ireland in 2013 had sustained a serious knee injury in a challenge match at the weekend against Munster club champions Na Piarsaigh.

In Fitzgerald’s favour is the fact that the county will be campaigning in Division One B, which will allow a certain amount of leeway in trialling players for the year ahead.