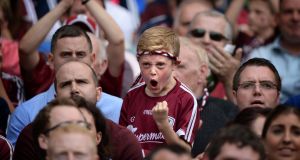 A young Galway fan gets behind his team at Croke Park. Photograph: Dara Mac Donaill

Galway GAA chairman Pat Kearney said he played no part in blocking access to the investigation into the county’s financial irregularities and that he was among the first to bring the matter to the attention of officials in Croke Park.

Kearney, who was elected unopposed at a fiery annual convention on Monday night, said they now need to implement new policies and controls following an independent review.

Shocked delegates at the Galway convention were told by treasurer Mike Burke, who took up office a year ago, that credit card irregularities occurred, that unauthorised bonus payments were signed off on, and that ticket money was not paid to Croke Park on a timely basis.

The treasurer also claimed he had been blocked by people inside Galway GAA as he sought to uncover the truth behind their finances earlier this year.

Kearney was re-elected as chairman unopposed at the convention and in his address to delegates he said he wasn’t involved in trying to stymie the investigations of the treasurer.

He then appealed to the clubs to work together and adopt the recommendations offered from an external audit into Galway GAA’s finances.

“I just heard someone talking about people who are blocking and preventing progress on the audit report, I can categorically say that I blocked nothing and that I helped them the whole time,” said Kearney.

“When I became chairman in 2017 you are dealt the hand you are dealt and you have to deal with it. That’s what I’ve been doing since 2017.

“I was the first one that went to Croke Park with Michael Larkin [hurling committee chairman] and we also spoke with the relevant authorities and we got advice from Proinsias Kitt [Galway GAA’s registered auditors DHKN] and from Croke Park. We are trying to manage three masters at the one time and that’s what we’re trying to do.

“As Michael Larkin said earlier, we went to Croke Park in April 2017. The process has been long and it has been painful, there is legal constraints on us. We get legal advice and if we don’t take it we’re shot and if do take it we’re also criticised.

“I think I always kept the interest of Galway GAA at heart. I have worked day and night for the last 18 months to try to help things on and get along. There is a lot of work behind the scenes that nobody knows anything about.

“I don’t want to say any more. We are moving forward and that’s what we have to do.”

It took several hours, but after lively debate and heated exchanges from delegates, Galway GAA’s accounts for 2018 were passed at Monday night’s annual convention.

After one year as treasurer, Burke has started the process of cleaning up the county’s finances and he said he stood over the 2018 finances.

“I am a year in as treasurer, these are my accounts,” said Burke. “I’ve worked hard to prepare them. I think if these accounts are not adopted tonight it puts my position in a very precarious situation. I have put my heart and soul into this situation.”