Michael Murphy opposed to trialling new rules in the league

Donegal star says such a prospect risks ‘diminishing’ the competition 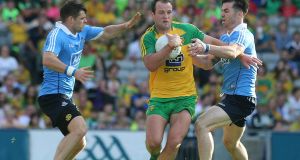 Michael Murphy: “I hope they come to their senses and realise, yes trial them, but find games and friendlies to trial them in.” Photograph: Lorraine O’Sullivan/Inpho

Michael Murphy says the prospect of trialling the GAA’s new rules in the league risks ‘diminishing’ the competition.

The experimental rules were in play on Sunday when the Donegal captain watched his team beat Sligo in a challenge game in Letterkenny.

Donegal get their 2019 campaign underway on Sunday week when they take on Queen’s in the Dr McKenna Cup. The handful of new laws could yet be retained for the 2019 Allianz Football League.

“My first view is that it would diminish the importance of the league,” Murphy said. “So many teams now have upped it in the league. Look at the way the league has been played in the last three or four years.

“The level and the intensity is like the championship now. The quality of the games are really strong. I hope they come to their senses and realise, yes trial them, but find games and friendlies to trial them in. To trial them in one of our top table competitions, I’m not so sure.”

In Sunday’s game, which Donegal won by 2-19 to 1-7, the restricted hand passing was the one that was the most obvious with players audibly counting the number of passes at times.

There were three ‘offensive marks’ late in the game – two for Donegal and one for Sligo – the forward-played sideline kick didn’t cause any difficulty and there were no sin-bins.

Murphy said: “You’re fearful of too many changes coming in year-after-year. You might have to learn a new game. Like, there are potentially a lot of new rules that do change the game in quite a big way.

“I’m all for trialling and pushing the thing forward. If it can be improved, then trial them, but where and when you trial them is a huge thing.”

Donegal manager Declan Bonner says he hasn’t spent too much time coaching to the new rules in training as he believes they will be binned before the start of the league at the end of January.

“All they’re doing is slowing the game down,” Bonner said. “I didn’t agree with them from the start. The more I look at it, I just wonder how somebody let those come in. “I’m just glad they’re only being trialled in the McKenna Cup and hopefully that will be the end of them.”